Meet the veterans working at Amazon

Phil Davenport and Joe Haggis left the British Armed Forces in search of a better work/life balance. Like hundreds of veterans and reservists, they have found a fresh start at Amazon.
By EU Amazon Stories Staff

They are good leaders and communicators, resilient and flexible. Yet, they struggle to find a satisfying career path. We are talking about veterans, ex-military personnel who, for a number of reasons, at a certain point in their life decide to leave the Armed Forces and transition to the civilian world. According to the 2016 Veterans Work report, commissioned by Deloitte, the Forces In Mind Trust and the Officers’ Association, about 16,000 men and women in the UK leave the military every year: for many of them, finding a job is one of most challenging aspects of their transition.

As stated in the report, a perceived lack of industry experience is one of the main barriers to employment: skills that veterans develop in their military career often are not recognised, or regarded to be less relevant than conventional qualifications by civilian employers. Negative stereotypes may also damage their chances of finding a good job.

Military employer of the year

Amazon employs hundreds of veterans and reservists in its operations sites and corporate offices across the UK, a number that keeps growing every year. The company kicked off its military programme in Europe in 2017: “Our goal is to raise awareness of the opportunities that Amazon can offer to ex-military personnel. Their skills match very well with our culture and practices,” says Gillian Russell, EMEA Military Affairs Manager at Amazon and a former Navy Officer herself. “Recruitment is definitely one of our priorities, but our activity goes beyond it. We work on engagement and development in collaboration with our military affinity group, a dedicated employee network, and we are connected with philanthropy and transition organisations all over Europe.” In 2019, at the British Ex-Forces in Business Awards, Amazon was named Military Employer of the Year, and Gillian was recognized as Advocate of the Year.

Phil Davenport, 32, is one of the veterans working in Amazon’s fulfilment centres. Phil was only 17 when he decided to join the Royal Navy, following in the footsteps of his elder brother: “He seemed to be having a good time, seeing the world, making good money. My friends from school were studying and living with their parents, but I wanted to get out and build my own life.” He became a submariner, working on weapons and communications systems, a job that he loved and allowed him to travel around the world.

In 2017, after almost 14 years of service, Phil left the Navy. “I had thought long and hard about it. I made up my mind while out at sea, on an 11-months journey. Over the course of that mission, I would only get two weeks to spend at home. By then, I was married. We were keen to start a family, but we were struggling. I felt like I was missing an important part of my life – the ‘normality’ of being able to go back to my spouse every evening. I wanted that for my future. That was when my decision was made. A few years later, I turned it into reality.”

Finding employment in the civilian world wasn’t easy. Out of 96 applications Phil submitted, only 5 led to an interview: a disheartening rate. “I found interviews quite daunting, too, as I didn’t have a lot of experience,” he says. He remembers that period as a particularly stressful time: “I had a wife to support, a car to maintain, and a mortgage. Without a job, I would end up on the street in a matter of months.”

From submarines to Amazon

Phil came across the Amazon recruitment stand at an engineering job fair. “I had never thought of Amazon as a potential employer. I had a brief chat with the recruiter, who was a veteran, too. They said my background would be perfect for a role in Operations.” Phil was hired in the Amazon fulfilment centre in Manchester, a robotics site working with the latest technology. As a senior technician, he joined the Reliability Maintenance Engineering (RME) team, responsible for maintaining the equipment in the fulfilment centre – everything, from the building services to the conveyor belts, to the robots and technology. A year and a half later, he was promoted to the role of Area Manager – a recognition of the leadership skills he had developed in the military. “I am the building’s services manager: my team makes sure everything in the building is running correctly, from the canteen to the sewage system to the air conditioning. The daily experience of around 1,500 associates depends on us!”

Joe Haggis, 27, works in the same team as Phil. He, too, chose to leave the Forces (in his case, the Royal Air Force) in search of a more balanced family life and, like Phil, he was promoted to a senior position – in less than a year. “For over five years I was a weapons engineer in the RAF, but I lacked industry experience,” he explains. “I was excited to have the opportunity to work at Amazon. As a senior RME technician, I am responsible for investigating and fixing technical issues and breakdowns in the building. It is a great fit for my engineering background, I get to work with advanced technology and I have the freedom to propose new ideas to improve processes across the site.”

Something Joe loves about his job is the camaraderie: “Over 50% of the RME team is made up of veterans. The fact that we all share a similar mind set has made it easier for me to fit in.” Reflecting on the value that military candidates can bring to civilian employers, Joe has no doubts: “People say that we have good self-discipline, attention to detail, and punctuality. We work well under pressure and we don’t mind the responsibility.”

Phil and Joe have found the balance they were looking for. Phil beams: “Two weeks after leaving the Navy, we found out that my wife was pregnant. We had been trying for ten years! Now my son is one, and family life couldn’t be better.”

In 2019, Amazon formed a partnership with Veterans Aid, a charity supporting veterans in crisis in the UK. The partnership focuses on awareness initiatives, recruitment, fundraising, food redistribution and donations. Amazon customers can support the work of Veterans Aid through the Amazon Smile programme. 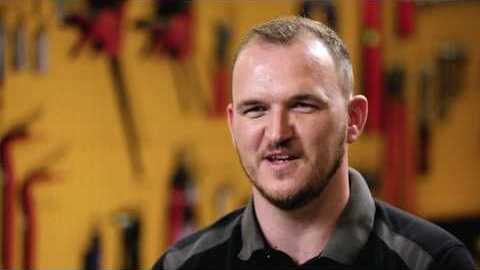 Meet the veterans working at Amazon