Determined to build a career at Amazon, Lionel is already a team leader after working just two years as a permanent employee at one of Amazon’s five distribution centres in France.
By Day One Team

With a smile forever on his lips and an Ariège accent that warms the heart, Lionel Boulbes is a romantic. But he also knows how to be pragmatic. When he was the manager of a large group in the restaurant industry, he fell in love with a member of his team. In order to not put the job of the employee who would one day become his wife at risk, Lionel resigned. “Relationships between a manager and a member of the team are never received very well. My wife had been working for this group for 15 years when I arrived. It was clear that I had to leave.”

A graduate of a professional baccalaureate program in the hospitality and restaurant industry, Lionel has always taken his destiny into his own hands. Having been deputy director of a large hotel chain, he left the restaurant industry to become part of a security team on the Airbus A380 construction site before joining the police force. “I did it to follow in my father’s footsteps,” he explains, “but mentalities had changed.” He then returned to the restaurant industry and opened his own restaurant in Narbonne, which he ended up closing due to a dispute with the owner of the property. And it was by accepting this very job at a new hotel chain that he met his wife.

He then tried out another job in the fast food industry, “but because I was trained in the traditional restaurant business, I didn’t feel comfortable there,” he explains. “So while I waited to find something else, I accepted a job at Amazon. That was in 2015 and I came to love the atmosphere so much I never left!”

Determined, plain and simple
Lionel became a team leader after two years. A career path with a very simple explanation: Lionel is determined as all get out. “At Amazon I found a close-knit atmosphere and excellent attitudes, something that’s reflected in the activities that are organised to build team morale. It’s a stimulating environment with a very down-to-earth management team. I’m doing well here and I wouldn’t give up my job for anything in the world!”

At Amazon I found a close-knit atmosphere and excellent attitudes. It’s a stimulating environment with a very down-to-earth management team.

Determined, the bold Ariège native has had each and every job starting with his first task, as he wanted to learn everything there was to know about Amazon. “They offered it to me,” adds Lionel, “but I also asked for it. Since becoming a team leader, I take advantage of every training opportunity. I asked to regularly change teams to get to know every link in the chain. At the end of the year, I also take advantage of end-of-year peak time to work at night and learn new things. That way I can expand my skills and train for the job.”

Making the most of internal promotions

For Lionel, there isn’t a big difference in skills when it comes to being a manager in the restaurant industry and working at Amazon. “Instead of managing the flow of raw materials, I manage the flow of merchandise. My goal, in both cases, is to make sure the client is satisfied. But here, I’m not asked to work holidays or weekends, and all my overtime hours are paid or compensated for. In other words, I put my management experience to good use, but in a much more pleasant setting where people are respected and taken into consideration.”
38 years old, with a two-year-old daughter, Lionel is so motivated that he is preparing to return to university to earn his professional bachelor’s degree in logistics management by applying to benefit from the APEL certification system. In this way, he would like to advance his career to becoming a manager at Amazon.

“The human resources team has helped me put together my application, and soon I have to sit an oral exam at the Université de Valence. I should probably take courses to expand my knowledge of mathematics or English to complete my training. But that’s no problem: I am ready to go back to school to get my degree and carry on moving up. Amazon has given me the opportunity and supports me in my projects. It would be a shame to not make the most of it.”

Visibly happy, Lionel has “found his second family.” “My wife would tell you that she’s never seen me so happy and radiant when I come home from work. I’ve only been at Amazon for three years, but I hope I’ll be here for a very long time. Perhaps until I retire!”

EmployeesFranceFulfillment center
How did you like this story?
Yawn
It's OK
It's Good
It's Great
I love it!
Thanks!
Working at Amazon 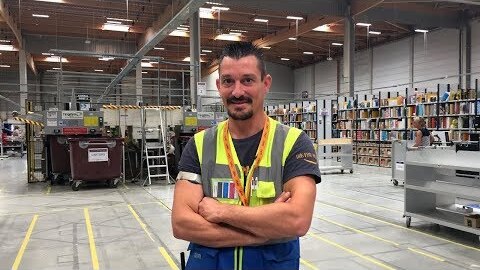