Rubén Heras is an Amazon associate that combines his job at the Barcelona logistics center with his project Flamenco Queer. In the pursuit of his dream of being a flamenco dancer, he has broken down many gender barriers and has become an LGTBIQ+ rights advocate. He is one of the winners of the Amazon Stars initiative, which promotes the talents among the company’s employees.
By Day One Team

Dancing and identity
Since he was a child, Rubén’s passion has been dancing flamenco. He’s always had the support of his mother and, despite the difficult financial situation of their single-parent household, she worked very hard during Rubén’s childhood so he could dance. “I am who I am thanks to my mother”, says Rubén.

Growing up he encountered that, within the orthodox flamenco practice, there were many prejudices and strict gender rules that did not match his identity. For instance, with the traditional clothes of the flamenco dancer or bailaor. As Rubén himself explains, “performance starts with clothing, and I always loved wearing all types of fabrics, tassels, skirts… I can’t perform in clothes that don’t represent who I am”.

Creating an inclusive space
“Flamenco Queer starts with the necessity of being authentic, of shining on stage by being who you really are”. Rubén, together with other artists, started the Flamenco Queer project to create an inclusive space that could fit all gender identities through music, dance, aesthetics, and every part of what makes the flamenco performance.

This initiative wants to create a community within the world of flamenco by including all LGTBIQ+ identities and explore different expressions beyond gender barriers. “The doors are open for any person who might feel represented by this understanding of flamenco”, explains Rubén. Flamenco Queer has collaborated with NGOs performing in support of gay-related initiatives, such as AIDS or transgender violence awareness.

A star in Amazon
Through the Amazon Stars initiative, Amazon wanted to appreciate its associate's hard work during this difficult year. All associates in Spain were asked to nominate their most exceptionally talented coworkers, and Rubén was one of the winners. To help him pursue his dream of being a flamenco dancer, he was gifted non-binary flamenco clothes designed by the iconic gender-fluid fashion designer Palomo Spain who has worked for stars such as Beyoncé or Madonna.

The Amazon team was so struck by Rubén’s talent that decided to recognize him as the Most Shining Amazon Star, a prize that included a surprise private session in the tablao flamenco el Corral de la Morería in Madrid, recognized as the “world’s best tablao”. He got to perform with the famous flamenco singer Alba Molina and to meet and be dressed by Palomo Spain, who said that “seeing Rubén dancing on stage with my clothes was very moving”.

Living true to himself
Rubén brings his life motto of being faithful to his authentic self not only on stage but in every aspect of his life. That is why it is so important to him that his job as an Amazon associate in the Barcelona logistics center allows him to do so. “I love the fact that Amazon has recognized me as an artist. I really like working here because I can be myself”, says the dancer.

People like Rubén are an example in the fight for diversity and inclusion in the workplace, in the flamenco arena, and in all spaces of our society. His advocacy for LGTBIQ+ rights and the way he portrays his own truth in his everyday life is what make him a true Amazonian. 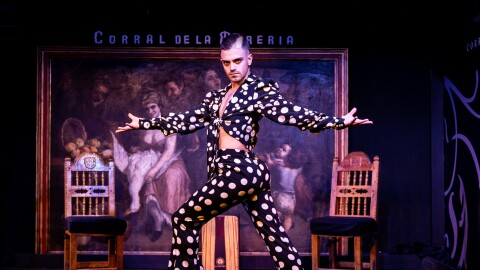