Tech women are changing the world

Maths, computer science and making the tech industry a great place for women: Helen Lyashenko, Software Development Manager at Amazon, is a woman of many passions – and the head of the London chapter of the Amazon Women in Engineering affinity group.
By EU Amazon Stories Staff

When Helen talks about her job, her eyes light up. As a Software Development Manager in the Alexa team, her role is to manage a team of four engineers focused on enhancing Alexa’s question-answering capabilities through multimedia: “We work on devices equipped with a screen, like the Echo Show,” she explains. “Working on this kind of product is really cool. What we do is changing the way people live.”

Innovation is not Helen’s only passion. As the lead of the London chapter of Amazon Women in Engineering (AWE), she is also very active on the gender parity front. The group is a global employee-led organisation designed to encourage diversity in technical roles, and Helen is a very strong advocate for it: “Technology is changing the world. There is a great opportunity for women to contribute.”

A career in computer sciences: not just for boys

Originally from Canada, Helen moved to the UK in 2015 to fulfil a double dream, working on Alexa’s innovative technology and living in London – according to her, the best city in the world. Her desire to get involved in the diversity field was born out of her personal experience. “As a kid, I was always good at maths and physics. At 12, I started playing around with code: I had my own website before blogs were even a thing,” she recalls. Yet, she was initially reluctant to pursue a career in computer sciences (CS) as “that was for boys,” she says. After taking her first CS classes in high school and briefly flirting with the idea of becoming an art historian, Helen decided to give her passion for science a chance, and enrolled in the CS course at Waterloo University. “At the beginning it was intimidating,” she says. “There were only a handful of female students in my class, and most of our male classmates seemed much more confident. These guys sounded as if they had been building computers since they were five: what was I doing there? I felt out of place.”

Despite her doubts, Helen really enjoyed solving problems and coding - and she was good at it. “As time passed, I gained confidence and began to ignore the impostor syndrome. It slowly went away, especially once I got my job at Amazon and found so many opportunities to contribute. By then, I knew I could make my own career path,” she says. Seeing women in her reporting chain helped, she recalls. “There were several women among my managers, directors, vice presidents. If you cannot see what you can become, it’s harder to have that dream.”

Something Helen immediately loved about Amazon’s culture was its approach to innovation: “Amazon hires leaders, people that have ideas and want to make an impact. Everybody is encouraged to speak up and get things done: we’d rather you asked for forgiveness than for permission, and if an idea is good, it doesn’t matter who’s conceived it. It’s empowering.”

As a manager, Helen actively promotes diversity by setting the example (her team has a 50/50 gender balance) and through her work with the affinity group. “AWE’s mission is simple: we want Amazon to be the best place to work for technical women,” she explains. The group is responsible for a series of initiatives aimed at building an internal community offering support and advocating for the needs of female employees in technical roles, and it’s also active on the external outreach front, encouraging girls to pursue STEM careers. “If just one girl decides to go into STEM thanks to our efforts, then I will have done my job. ”

In the UK, Amazon has recently launched Amazon Amplify, a programme designed to increase the number of women in technology and innovation roles across its UK business. The programme is backed by findings of research conducted in partnership with WISE, the campaign for gender balance in science, technology and engineering. The consultation was designed to help understand the barriers to increasing diversity across industries, and help create a roadmap for companies to follow in improving gender diversity at all levels.

When asked about the future, Helen’s views are optimistic. “The culture is evolving, I think we are getting there. I really hope so: careers in technology and science are extremely rewarding, and women should feel as entitled to these opportunities as men do.”

Working at Amazon
How did you like this story?
Yawn
It's OK
It's Good
It's Great
I love it!
Thanks!
Amazon Web Services 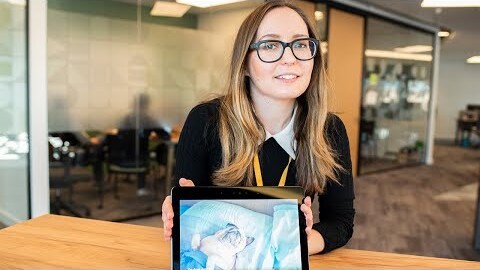 Tech women are changing the world