Go behind the scenes as Amazon develops a new electric vehicle

100,000 electric delivery vans will save millions of kilograms of carbon per year.
By Day One Team

A sprawling industrial complex in Michigan doesn't look anything like it did decades ago when American workers assembled automated teller machines in the building. Today, sun-drenched white walls surround a design studio. Light bounces off gleaming floors to highlight scale model vehicles that are nearing final design.

The vehicles are the next generation of Amazon delivery vans—electric-powered vehicles that will hit the roads beginning in 2021.

We’re trying to build the most sustainable transportation fleet in the world.

The order is part of The Climate Pledge, Amazon's commitment to meet the Paris Agreement 10 years early. The pledge also calls on signatories to become net zero carbon across their businesses by 2040, a decade ahead of the Paris Accord's goal of 2050.

"We're trying to build the most sustainable transportation fleet in the world," said Ross Rachey, director of Amazon's global fleet and products. "It also needs to be the most functional, the highest performing, the safest."

Amazon's transportation team spent 18 months evaluating a variety of electric vehicle options to reduce its carbon footprint. To move quickly, Rachey's team realised the best way forward was to chart their own path and create a new, custom electric vehicle to meet Amazon's needs now and in the future.

The vehicles will reduce carbon emissions, raise the bar for driver safety, and optimise technology and design elements to create a best-in-class driver experience. Manufactured at Rivian's plant in Normal, Illinois, they'll come in three size variants and support multiple battery sizes so they can be optimised for specific delivery routes.

"We are focused on driving efficiency into every aspect of the vehicle design—everything from cabin heating to driver ergonomics to drivetrain design has been optimised for time and energy," said R.J. Scaringe, CEO of Rivian. "And then the echo effect of this, of causing other logistics players in this space to also look at how they drive up efficiency within their fleet, will have a very large impact."

"We created The Climate Pledge and are investing in 100,000 Rivian electric delivery vans to demonstrate that there is a large and growing market for green technologies," he said. "It's important that large companies like Amazon stimulate investment in the development of low-carbon products and services that will be required to help companies of all sizes decarbonise their operations and support a thriving, low-carbon economy."

Drivers who currently deliver Amazon packages informed the vehicle's design and functionality—from how the seat feels to the ease of getting in and out of the vehicles, package loading and unloading, and visibility.

Design boards featuring countless iterations of the Amazon vehicle surround Rivian's studio, where clay sculptors smooth the edges of a full-size clay model that provides a physical representation of what the vehicle will look like for production. In another room, drivers step into a virtual reality that simulates the driver experience in the new vehicles.

The design incorporates Amazon's technology to offer drivers a seamless delivery experience. That includes a digital instrument cluster and central display screen integrated with Amazon's logistics management, along with routing and package delivery technology systems to make it easier for the drivers to focus on operating the vehicle. The system removes the need for extra devices that provide address and mapping information. Integrating Amazon Alexa will make it easy for drivers to ask for help or use simple voice commands in the cargo bay when sorting packages without having to manually enter commands or consult handheld devices.

Devon Cooper was invited to check out the new vehicles and share feedback with Rivian engineers. He's a Detroit-area delivery associate who works for an Amazon Delivery Service Partner to deliver packages to Amazon customers. "Everything that I suggested was already on there," Cooper said. 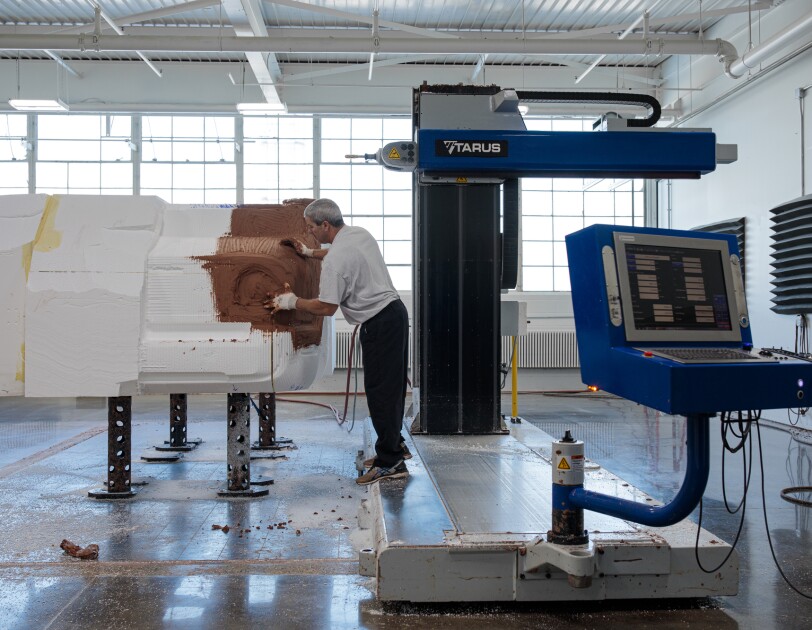 The foam and clay milling studio at Rivian headquarters.
Photo By JORDAN STEAD 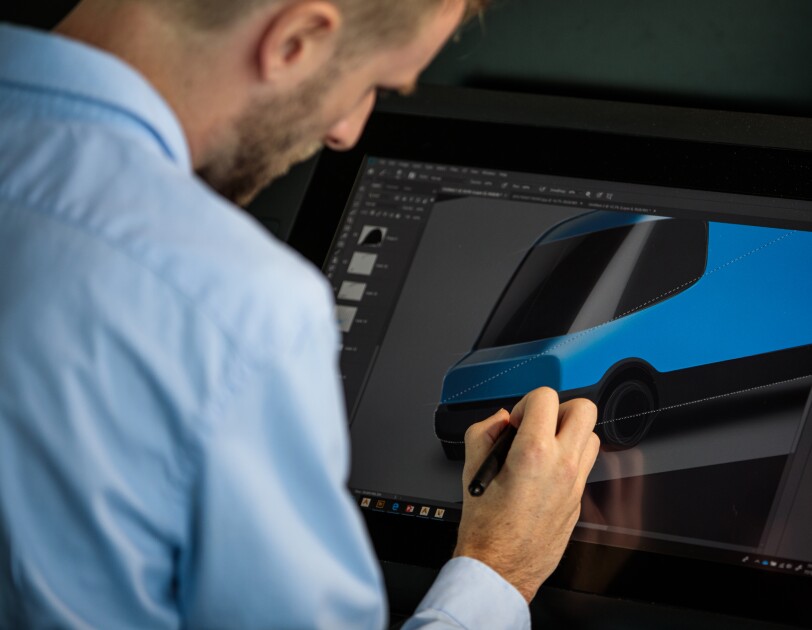 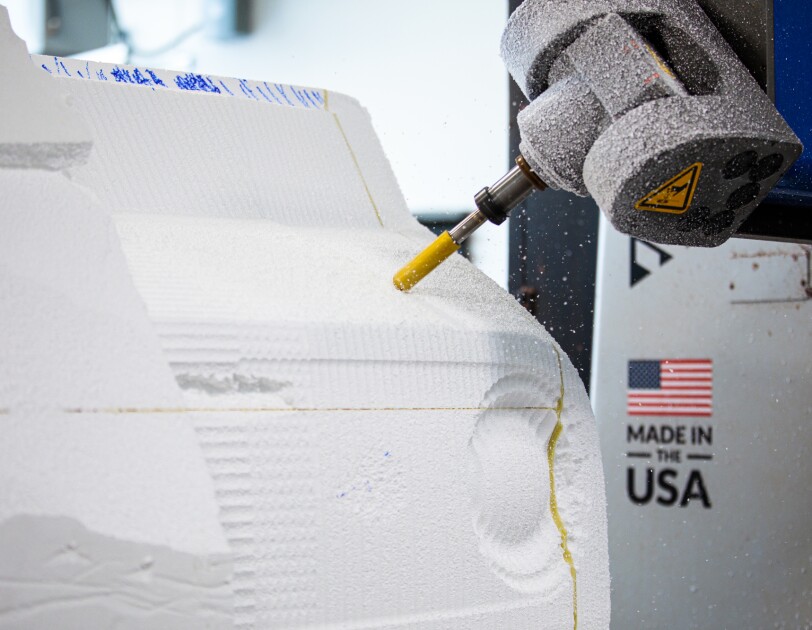 Styrofoam provides the base for a full-sized clay model of Amazon's electric delivery vehicle.
Photo By JORDAN STEAD 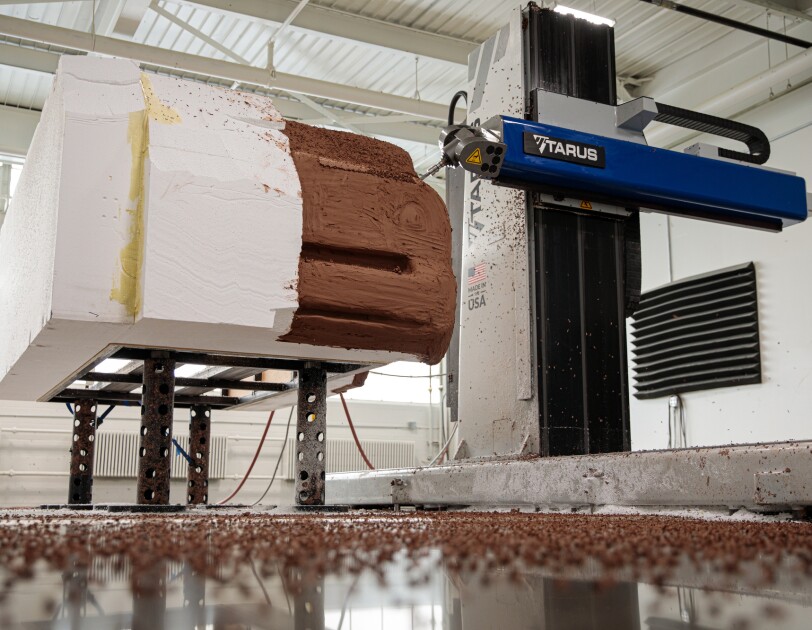 To create a full-sized clay model, Rivian engineers use lightweight Styrofoam as a base, pack a layer of clay on top of it, and mill out the detail of the vehicle's exterior.
Photo By JORDAN STEAD 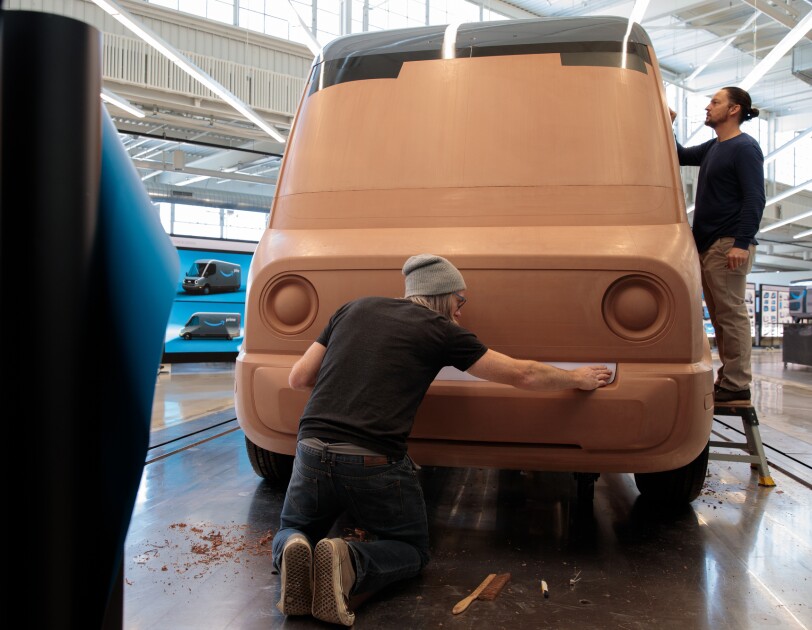 A full-size clay model is a low-cost way of representing the way a vehicle will look physically, before production begins.
Photo By JORDAN STEAD 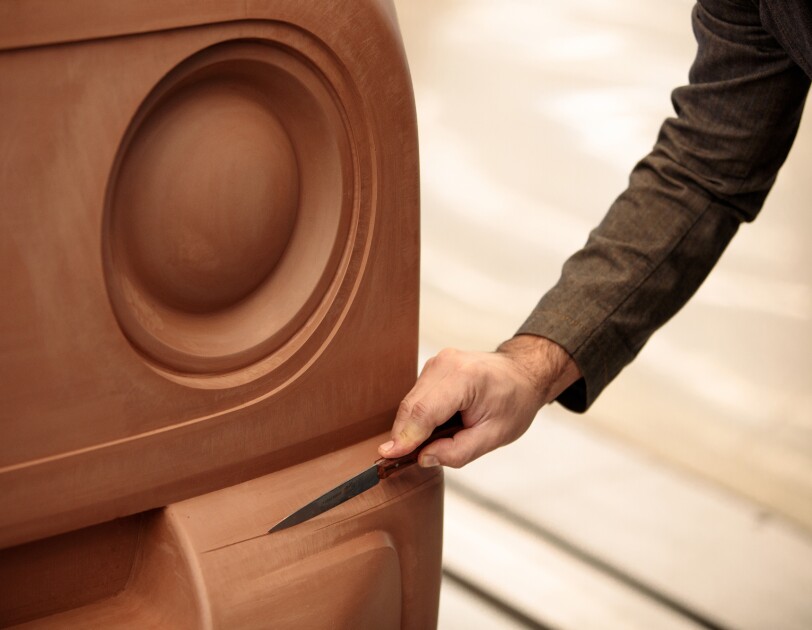 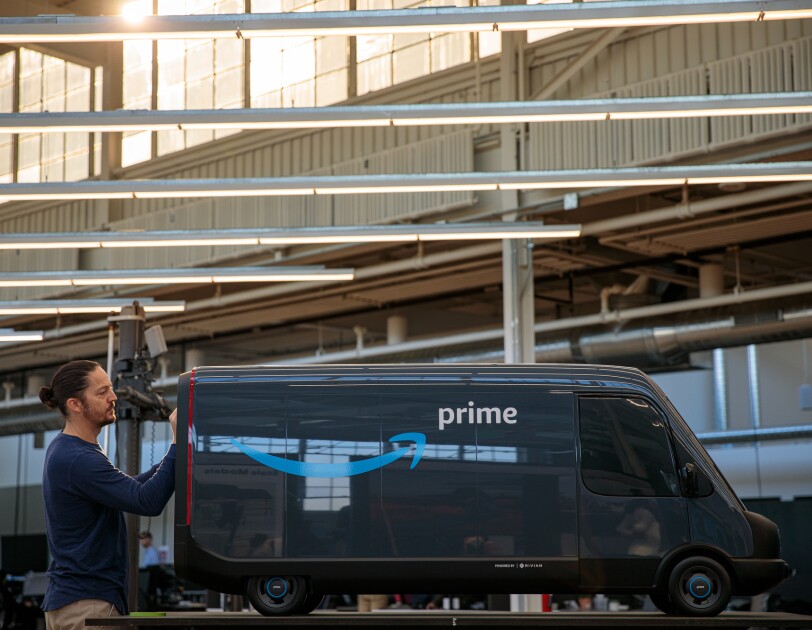 A Rivian engineer puts the finishing touches on a scale model of Amazon's electric delivery vehicle.
Photo By JORDAN STEAD 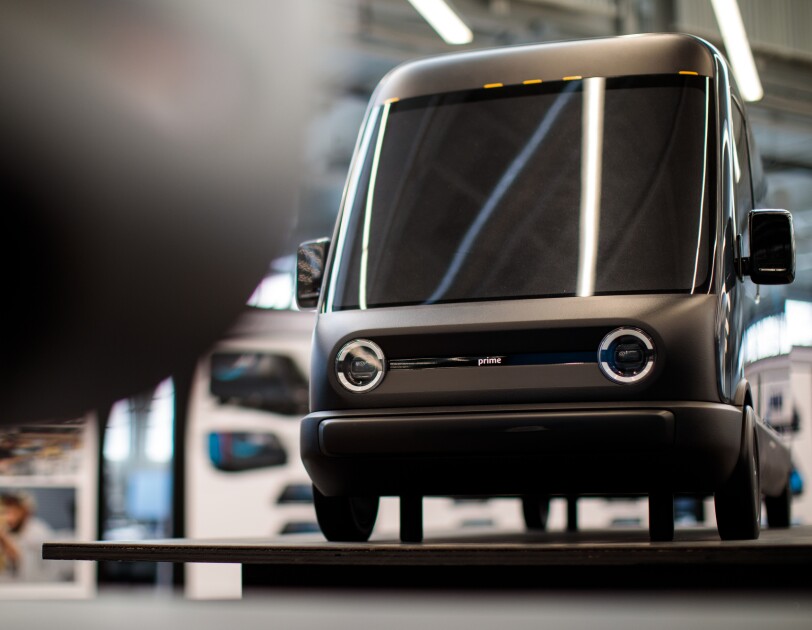 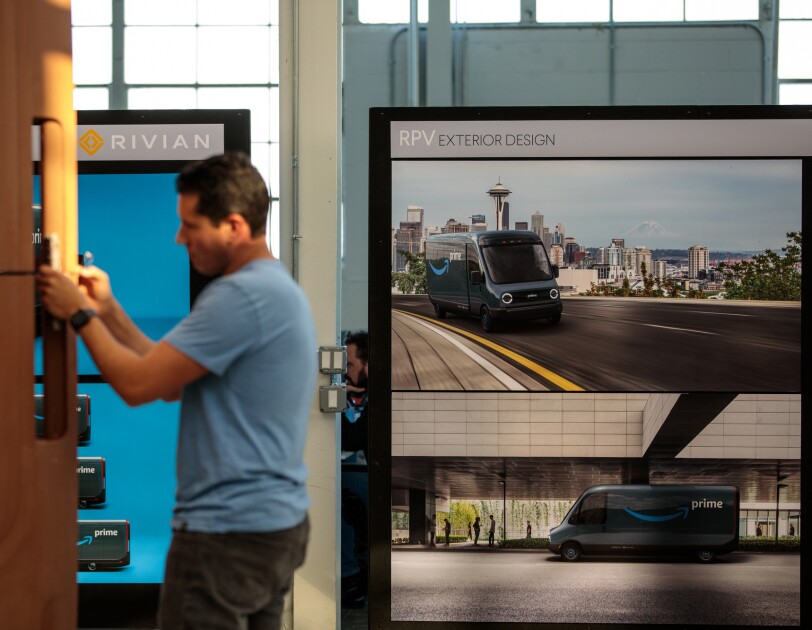 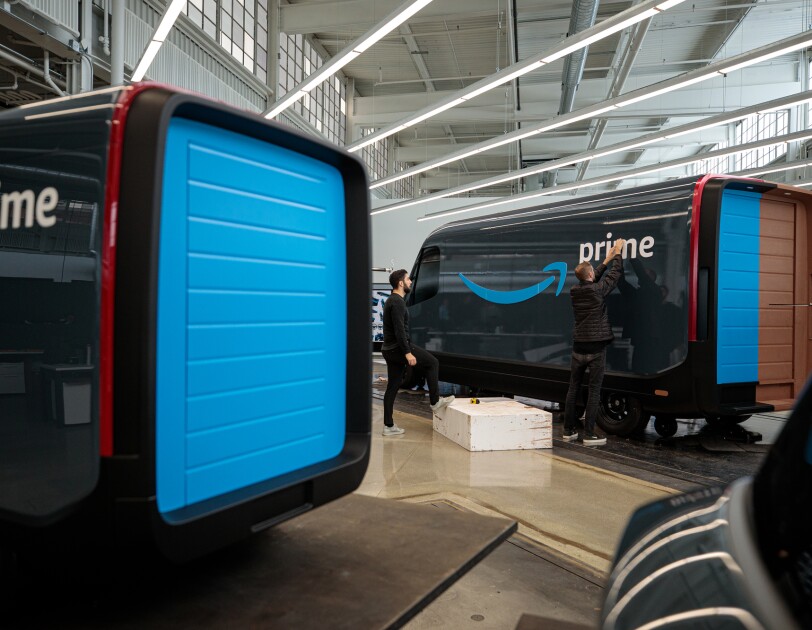 Models of Amazon's electric delivery vehicles, which will hit the roads starting in 2021.
Photo By JORDAN STEAD 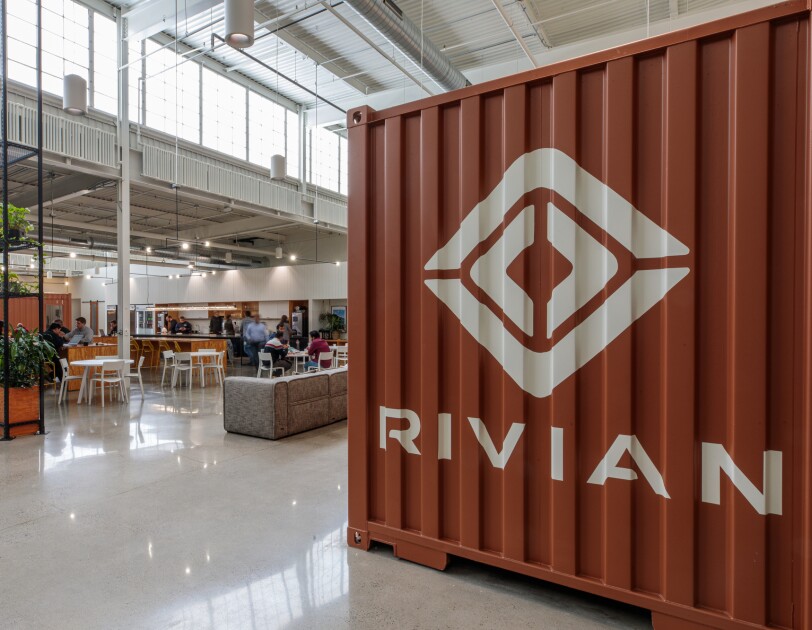 Inside the Rivian headquarters in Plymouth, Michigan.
Photo By JORDAN STEAD 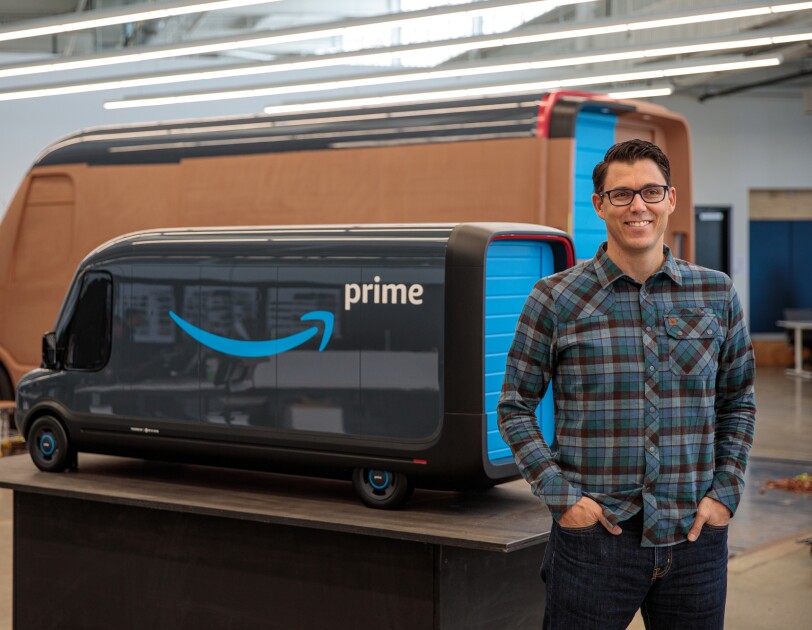 R.J. Scaringe, Rivian CEO.
Photo By JORDAN STEAD
SustainabilityRenewable energy
How did you like this story?
Yawn
It's OK
It's Good
It's Great
I love it!
12 Ratings
Thanks!
Working at Amazon 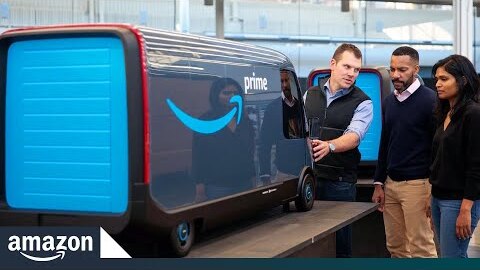