Henkel and Signify join Amazon in taking the pledge and are implementing real, science-based changes to their businesses on their path to reach net zero by 2040.
By Day One Team

“By signing The Climate Pledge, companies around the world are taking collective action to protect our planet from the catastrophic impacts of climate change,” said Jeff Bezos, Amazon founder and CEO. “We welcome Henkel as they join us in our commitment to be net-zero carbon by 2040, a decade ahead of the Paris Agreement. We are also excited for Signify, which achieved carbon neutrality earlier this year, to join The Climate Pledge with the goal of collaborating with other signatories and sharing best practices. These companies are demonstrating important leadership as they help us accelerate the transition to a low-carbon economy and protect the planet for future generations.”

Amazon and Global Optimism co-founded The Climate Pledge in 2019. Amazon was the first signatory and 13 organisations have now signed on including: Amazon, Best Buy, Henkel, Infosys, McKinstry, Mercedes-Benz, Oak View Group, Real Betis, Reckitt Benckiser, Schneider Electric, Siemens, Signify, and Verizon—sending an important signal that there will be rapid growth in demand for products and services that help reduce carbon emissions.

Henkel, with headquarters in Germany, and locations around the world, has been a sustainability corporate leader for decades. The company has been working closely together with Amazon to promote sustainable innovation – for example, to enhance customer experience through new and sustainable packaging. Henkel’s long-term goal is to become climate-positive by 2040. As intermediate steps, the company plans to reduce the carbon footprint of its production by 65 percent by 2025 and 75 percent by 2030.

By 2030, 100 percent of electricity shall come from renewable sources.

By 2040, Henkel aims to have converted all remaining fossil fuels used in production to climate-neutral alternatives and supply surplus carbon-neutral energy to third parties. In addition, Henkel wants to leverage its brands and technologies to help customers, consumers and suppliers save 100 million tonnes of CO2 in a ten-year period from 2016 to 2025.

"Climate change is a global challenge, which requires our collective action. At Henkel, we want to make a positive contribution to protecting the climate. Based on our achievements to date and in line with our ambitions for the coming years, we are pleased to join and support The Climate Pledge," said Henkel CEO Carsten Knobel.

“Together with Amazon, Global Optimism, and the other signatories, we are committed to drive tangible progress and jointly take action to limit global warming.”

Signify, a world leader in lighting systems, has been a sustainability leader for many years. At the United Nations Climate Change Conference (COP 21), in Paris, in December 2015, Signify committed to achieve carbon neutral operations in 2020. Last September, it announced that it had reached this milestone and plans to double its positive impact on the environment and society in 2025. Its reason for joining The Climate Pledge is to share its experience, and to help and encourage other signatories advance their own carbon reduction programmes.

“We are proud to join The Climate Pledge community, as it mobilises companies to meet the goals of the Paris Agreement, 10 years early,” said Harry Verhaar, Signify Head of Global Public and Government Affairs. “We are committed to sharing best practices with other companies from our own journey to carbon neutrality, and to ramp up our positive impact on the environment and society.”

“The Paris Agreement set out a unifying roadmap for all countries and all people to address the climate crisis by taking action,” said Christiana Figueres, the UN’s former climate change chief and Global Optimism founding partner. “By joining The Climate Pledge, signatories are not just making a statement of commitment to the future, they are setting a pathway to significant actions and investments that will create jobs, spur innovation, regenerate the natural environment and help consumers to buy better starting now.”

Learn more about the Climate Pledge

Sustainability
How did you like this story?
Yawn
It's OK
It's Good
It's Great
I love it!
Thanks!
Working at Amazon 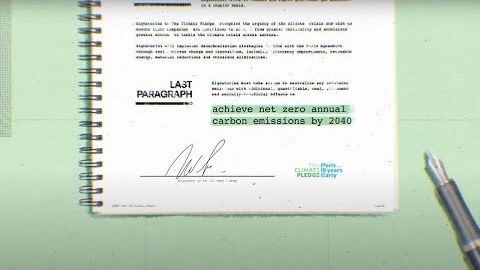