The man who wanted to fly

Jet Ski champion Franky Zapata invented the Flyboard, a machine that propels people into the air.
By Amazon Stories

“It’s always been a dream of mine to able to fly around like Iron Man.” A fan of comic books and superheroes, Franky Zapata has turned his dream into a reality. Having invented the Flyboard, he became the man who could fly. A native of Rove, a small town about 20 kilometres from Marseille in the south of France, Franky Zapata is definitely not an American. Nor does he have high-tech armour with impressive capabilities. But when standing on his invention, he certainly does fly around in the air like Iron Man.

We chose Amazon for the incredible visibility that the website offers. We think that this will be even more beneficial since we are part of the Launchpad programme, something which is specifically designed to highlight innovative products.

Everything started when he was 17 and discovered jet skiing. Seven European championships and two world championship titles later, Franky felt a creative impulse: after creating a hull for jet skis, he started working on a system to improve propulsion. “I always said it- but people didn’t believe me back then: if you can develop a jet, you can develop a skateboard or a plane,” he explains. “So my friends and I started doing measurements and came up with some striking figures: a ton of thrust. I said to myself: you could fly with that amount of force! I welded some nozzles to a wakeboard and went to a pond.” Franky Zapata had just invented the Flyboard Eau, the water-propelled airborne board.

Two years of research and development
The first Flyboard flew thanks to a pipe connected to a jet ski. It allowed you to fly up to 20 meters and also do figures. After a video was posted on the Internet, the young inventor quickly got millions of views and Flyboard flights gave way to spectacular competitions around the globe, which are very popular with board sports enthusiasts.

Founded in 1998, his company Zapata Racing would earn nearly a million euros in profit from the very first year of marketing the Flyboard Eau. “I knew that the idea in the long run was to remove the pipe, but I didn’t dare think about it. Since I began making a profit, I reinvested the money in research and development to try to find solutions,” recalls Franky. In fact, Franky and his team invested a total of two years into turning the project into a success story. Removing the pipe was made possible thanks to the use of jet engines, which are generally used to send missiles. “But we had issues with stability,” he recalls. “We had to come up with specific software. Normally, this should have taken us a year. But it took us a month and we found the right algorithms in February 2016.”

The Flyboard Air, today, is a high-tech invention that propels its passenger into the air thanks to the turbine engines that run on kerosene. It can reach an altitude of up to 3,000 metres and a speed of 187 kilometres per hour. It’s equipped with five engines that regulate the thrust and stability.

A spectacular flight
The journey here wasn’t easy: he was prohibited from flying for several months for safety and regulatory reasons. Nonetheless, Franky has invented a spectacular machine that’s straight out of science fiction. With the Flyboard Air, he has invented a type of technology that a lot of companies are interested in.

“The Flyboard is the fruit of teamwork. We dreamt of propelling people into the air and after lots of effort we achieved it,” explains Franky. “As it’s designed to be used by everyone, the Flyboard Eau doesn’t really require any prior training. The Flyboard Air, on the other hand, requires previous preparation. It is, however, a personal aviation system that’s extremely safe, easy, lightweight and can be manoeuvred by a single person.”

Today Franky Zapata is the head of a flourishing company that markets its technological gems via traditional networks mainly in the leisure industry. But he also wants to start selling online. His goal: taking the reputation of the Flyboard to the general public. To reach this new milestone, the company has chosen to try out an e-commerce website that can provide the widest visibility: Amazon. To get started, he chose to market the Flyboard Eau first.

“We aim to renew ourselves and to reinvent our distribution network. By launching on Amazon, we hope to target more individual clients. We chose Amazon for the incredible visibility that the website offers. We think that this will be even more beneficial since we are part of the Launchpad programme, something which is specifically designed to highlight innovative products. This step should complement our brand’s image in France and throughout the world,” says Franky.

In the meantime, the young entrepreneur isn’t idling away his time. Following the Flyboard Air, Zapata unveiled a new flying object called Ezfly and is already dreaming of cars that can fly. “Honestly, flying cars are just around the corner,” Franky reveals. And we certainly don’t doubt it. 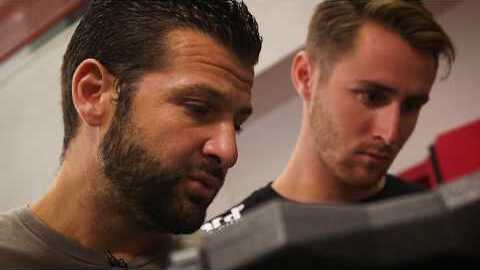 The man who wanted to fly