From Turin to the global market

Male and female clothing from Atelier Boldetti, in Turin (Italy), captivate the European clients at the “Made in Italy” store of Amazon.it.
By Day One Team

Hidden under an elegant suit, Giulio has two big tattoos: a Geisha that goes from his leg to his armpit, and a Maori drawing on his back that represents the god of the wind and the sea, done during a trip to New Zealand where he went trying to find the best waves to surf, his passion. “Nobody expects that I have tattoos when they see me in a suit. But this is me: the one with tattoos and the one with the elegant suit”, he says. Giulio Boldetti, 32 years old, knows about elegant outfits: co-owner of the Atelier Boldetti in Turin, together with his father Giorgio, combines an entrepreneurial style with long hair, tradition and modernity, business and fantasy.

A friend had told me about Amazon, about the “Made in Italy” store. I knew that it was a unique chance, but my father was sceptical, so I did what you do when there is a wave coming in: you cannot be scared and stop to think, you just have to ride it.

Growing up between fabrics, buttons and coloured threads

“I feel I am in between the past and the future of my company”, he says. “The atelier was founded in Turin by my father in 1973 when he reconverted an old tailoring factory. He started producing tailored shirts and suits for women, and then we expanded to man’s clothing.” Giulio grew up amid the fabrics. “My elementary school is less than a 100 metres away from the factory. After the lessons, I used to come here with my dad. I used to spend the afternoons amid the fabrics, buttons and coloured threads; the noise of the sewing machines is like a soundtrack to me.” A magical place to create thousands of wonderful stories under the look of the workers who are focussed on the creation of jackets, shirts, pants, skirts... the perfect outfit for a part of Turin, the refined and discreet one. “Today there are eight workers at the atelier, from modellers to cutters and tailors. Some of them are working with us since the beginning, they have a maternal approach towards me.” One of them in particular: Savina. “She was 18 years old when I was born and my dad often asked her to babysit me. I learned how to walk with her, at the factory. One afternoon I was crying and she didn’t know how to calm me down, so she put me down and then I started walking one little step after the other.”

“I started as an errand boy”

Since that moment, Giulio has walked a lot. “Once I finished high school I understood that I would like to work with my father. I started as an errand boy.” Little by little, his responsibilities grew: Giulio started representing the company and then working in sales and with the providers, one of the trickiest parts of running an atelier. “We choose the best fabrics, which arrive from a textile factory in Milan, Como and Gallarate, recognised at international level. The same for the buttons, the yarns and the moulds.” Nothing is left to chance, and the Atelier Boldetti started to gain a name due to the quality of the materials, the precision of the lines, the tailored cuts, the rigorously handmade sewing... “We follow the production process from A to Z: drawing, model design and packaging.” Always under the supervision of Giorgio, the founder and father of Giulio. “We are really close, but from time to time we argue.”

The “Made in Italy” store, a window to the world

Giulio gets easily excited. He wants to bring new things to the company. “A friend had told me about Amazon, about the “Made in Italy” store. I knew that it was a unique chance, but my dad was sceptical, so I did what you do when there is a wave coming in: you cannot be scared and stop to think, you just have to ride it”. Atelier Boldetti started selling on Amazon two years ago, with a line created exclusively for the clients whose purchase is delivered at home with a refined packaging made of linen. They can find fantasy or solid colour shirts for him, midi skirts and dresses for her, and much more: cufflinks, the Eau de Parfum 'Cashmere' and 'Seta’, scarves, handkerchiefs... They always remain faithful to the values of the Atelier Boldetti: craftsmanship, tradition and quality: these are the keywords of Amazon’s “Made in Italy” store. Launched in October 2015 and today present in Europe (Italy, England, Germany and France), the US and Japan, this store gathers the best Italian products from food to design, art, jewellery, clothing, and much more. They offer more than 50,000 products made by 500 craftsmen: tables in centenary juniper trees made by Sardinian carpenters, Umbrian oil from the hills between Assisi and Spoleto, Venetian masks, colourful ceramics from Salerno... A marriage between hi-tech and the finest products of Italy, an exhibitor that allows the little local realities to finally have an online voice and be known and sold worldwide.

A multinational that is both fast and human

“Thanks to the “Made in Italy” store, we have immediately had a huge visibility. Now we sell in many European countries. The satisfaction has been immense. We had the potential, but Amazon has helped us get off to a good start. I love Amazon’s speed together with its human value: it is a great company, a multinational that operates at global scale but where you always have contact with people.” Future goals? “Expand our market even more, thanks to the Amazon support and its logistics, but remaining always faithful to our values of craftsmanship and excellence. And I also dream about another championship: I am a huge supporter of Juventus.”

Selling on Amazon ItalyEmpowermentAmazon Stories
How did you like this story?
Yawn
It's OK
It's Good
It's Great
I love it!
Thanks!
Working at Amazon 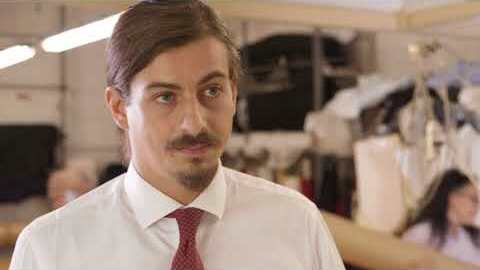