Women taking a traditional family business into the digital age

Lucia and Anna. Two women, mother and daughter, run a business specializing in the production of traditional Venetian masks, and they have managed to lead it into the future thanks to Amazon.it. Their secret: determination and mutual trust, without forgetting a touch of glitter. Their biggest fan? A superman: papà Vincenzo.
By Amazon Stories

“Are you ready for our ‘glitter effect’? This is a magical place: whoever enters here, leaves covered in sparkling dust like in a fairy tale.” Lucia Zerman, 63 years old, with the dark and vivacious eyes of a girl, is making her way with her Verona-based company that produces masks typical of the Venetian tradition, La Fucina dei Miracoli. You move among glitter containers in all shades, crystals in myriad shapes, sumptuous feathers, lacquers and varnishes that decorate her creations. These small masterpieces of craftsmanship have dressed the faces of Arabian princesses, Hollywood stars, cultural, musical, and political icons. “Think of a big name and they’ve probably worn one of our masks,” explains the daughter, Anna Della Croce, the 32-year-old co-owner of this woman-owned business, with a French style movie face and blunt manners leaving a gentle aftertaste reminiscent of Amarone, a typical local wine.

Young women that want to be entrepreneurs shouldn’t be afraid and should accept the challenge: We women are strong and are masters of problem solving.

The story of a company and a great love

“Just think that my mother studied accounting and was an employee! Then, she fell in love with dad,” continues Anna. La Fucina dei Miracoli is the story of a company, but also the story of a great love. “When I met Lucia, who was and still is the most beautiful girl in Verona, she was working at the town hall,” explains Vincenzo Della Croce, 75 years old, and founder of La Fucina. “We both left our partners and we started living in a house where we didn’t even have a bed, only the mattress.” At the time Vincenzo was a very popular actor in the city. “I had to bring the comedy of Goldoni to the stage, but couldn’t find any masks that I liked. So I built them myself.” His creations got noticed at the theater by the owner of a shop in Venice, who commissioned him for a thousand. “They sold like hot cakes.” But Vincenzo needed someone who could design and decorate the models. So he proposed it to Lucia. “’I’m going in,” I thought to myself. After all, if Vincenzo would have made shoes, I would have learned to make those too. He unlocked my inner creativity that I didn’t know I had.” It’s 1975: La Fucina dei Miracoli is born.

It’s been years of great success, everyone wants their masks embellished with rhinestones, braiding, feathers and lace. Then, the crisis hit. “In 2008, the telephone didn’t ring for an entire year,” remembers Lucia. “It was terrible, there was nothing to do at the company, every morning Vincenzo and I would look at each other and ask ourselves: “Now what?” But we didn’t give up: in Chinese the word crisis also means opportunity. A friend has a workshop where he makes bas-reliefs on metal plates. A plate that stays for too much time in acid gets perforated. Vincenzo saw it and he had an awakening: “Why not use this system to create a new kind of mask?”

It was a winning idea: “So we packed up the motorhome and went knocking on the door of every lingerie shop in the northeast.” This intriguing model won over the audience and we were back in business. When Vincenzo retired he passed the torch along to his daughter Anna, who, after getting a degree in journalism, could distinctly hear the calling of “the fairy world, as I call it. I grew up in a fantastical environment, where imagination comes true”. However, even dreams need a hand too. “When I first joined the company, I realized that we needed a digital breakthrough. The meeting with Amazon was held in 2016. Up until that moment, we were the leaders of the sector, but we produced for third parties. With Amazon we proposed to be direct sellers to the general public.” La Fucina dei Miracoli has found a place in the section of Amazon Made in Italy, which brings together the world of excellence of Italian products. “Now our masks ship to Australia, Asia, and to the United States, with 10% of our sales now online. We appreciate Amazon’s respectability; it’s a trustworthy channel, both as a seller and as a client.”

A tradition dating back to the 14th century

There are countless products beloved by La Fucina customers: from papier-mâché masks, masks for home decor, to those for wearing, and in metal or with evocative names: “Fortuna,” “Dea” or “Ricciolo.” A fascination rooted back to the 14th century. “The nobles wore them for privacy, to avoid being stopped in the streets,” says Vincenzo. “Then there was another, sneakier way they were used: the wife that cheated on her husband with a man wearing a mask could not be punished by law because she couldn’t recognize him.” The mask was an instrument to hide one’s identity. “Or to reveal one’s hidden side,” explains Lucia. “It makes you free, just like when you leave your phone at home,” added Anna. Lucia and Anna, mother and daughter. Lucia is the creative genius of the company, Anna is the digital arm. “Complimentary and accomplices,” smiles Lucia. “Our strength is being united and having the utmost confidence in one another,” confirmed Anna, who has a message to share: “Young women that want to be entrepreneurs shouldn’t be afraid and should accept the challenge: we women are strong and are masters of problem solving.” Without forgetting a little touch of glitter, which never hurt anyone.

SMESmall businesses on AmazonAmazon LaunchpadAmazon Stories
How did you like this story?
Yawn
It's OK
It's Good
It's Great
I love it!
7 Ratings
Thanks!
Amazon Web Services 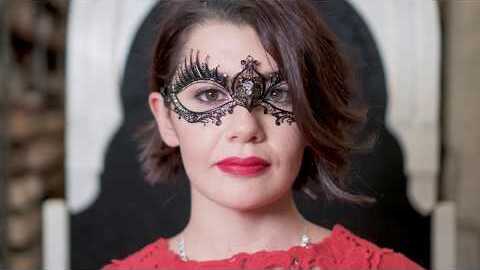