Look what the cat can't drag in

An Amazon employee didn't know how to code. That didn't stop him from using machine learning to invent a pet door that solved a disgusting problem.
By Dave Quigg

Years before hope, exasperation, and curiosity drove him to invent a smart cat door in his spare time, Ben Hamm was a pessimist. "I see it now as something that was unhelpful to me and somewhat paralyzing," he said, looking back on his mindset as a graduate student, when many of his classes focused on problems facing the world. Then Hamm got an internship at Amazon, and his outlook evolved.

"One of the things I learned from being here is that the people who were effective, they just had a belief. There is a deep optimism you have to have to build things," he said. "Inventions don't want to come into the world. Amazon really encourages people to think big and to believe that it can be done. " 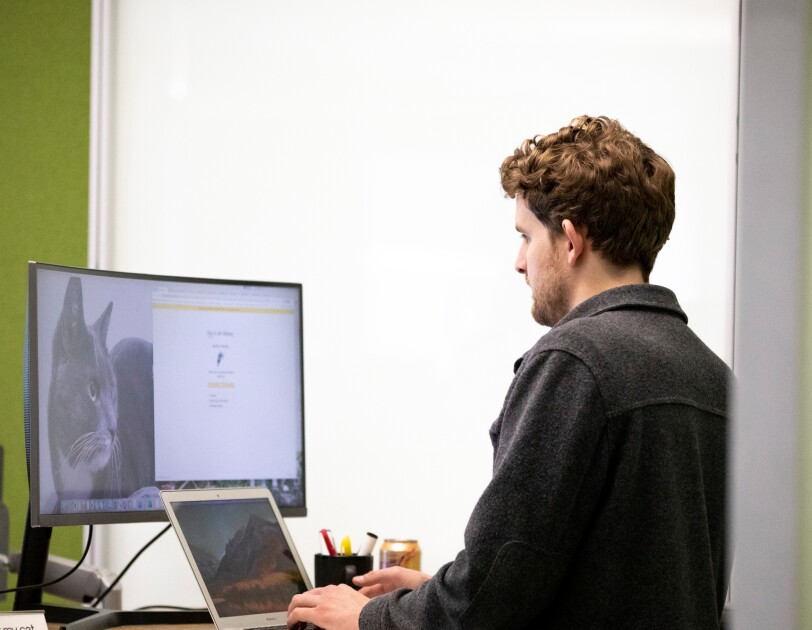 Ben Hamm on the job at Amazon. A photo of his cat, Metric, graces his screen.
Photo By DAVE QUIGG 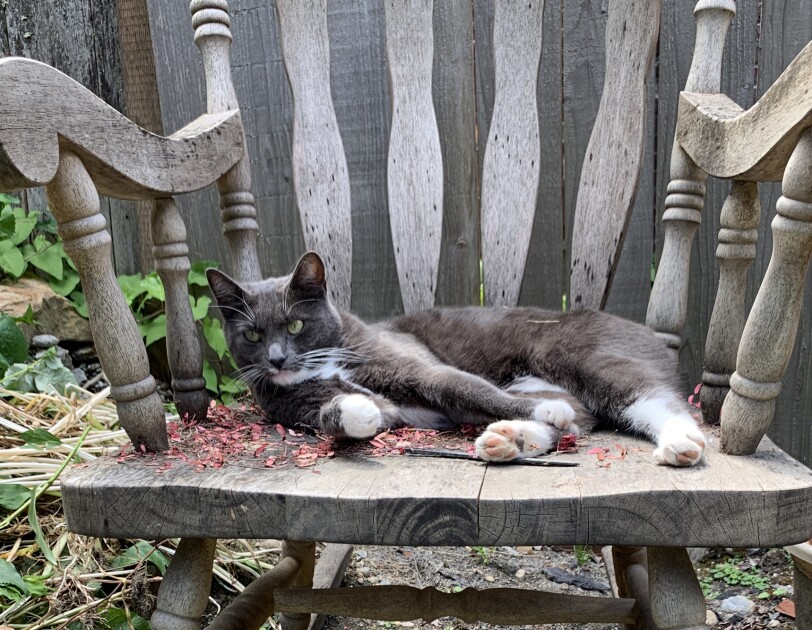 Now, finished with school and four years into a career at Amazon, Hamm's professional life is about making things happen. "I help engineers figure out what they should build next," he said. "I make sure that what they're building is the right thing to be building, that they have the backing of leadership, that we're thinking well ahead, that we're not going to build something and then decide we don't want it and throw it away."

Hamm's practice with clear-eyed optimism came in handy when he welcomed a cat named Metric into his life. Metric turned out to be an avid hunter, with such a fondness for rats that he started using his cat door to bring them into Hamm's Seattle home while they were still very much alive. "I mean, he's not in any hurry," Hamm said. "He's looking forward to playing with the rat. I'm the one who's very motivated to get it out immediately. I will say that once the rat is in, the best possible friend you can have to help you hunt it down is a cat because Metric will flush it out of places that I couldn't. So, in that moment, I'm very resentful and also grateful."

Grateful or not, Hamm needed a solution, and he somehow got it in his head that he — as a non-engineer who couldn't write code — might be able to use machine learning to create a smart cat door. Machine learning is based on the idea that systems can learn from data, identify patterns, and make decisions with minimal human intervention. He wanted a door that would recognize when Metric was carrying a rat and lock him out, or let him inside when he was rodent-less.

AWS DeepLens is a fully programmable video camera that lets users run deep learning models locally on the camera in order to analyze and take action on what it sees. It helps developers of even minimal skill level get started with deep learning in minutes by providing sample projects with practical, hands-on examples that can start running with a single click.
Learn more

Hamm's research led him to an Amazon Web Services (AWS) device, the AWS DeepLens camera, which makes it easy to access machine learning with no prior knowledge. Watch the video above to see how Hamm captured more than 23,000 images with the camera and then personally sorted the images into four batches — photos where Metric had a rat in his mouth, ones where Metric was approaching the door but didn't have a rat, ones where Metric was in the image but not trying to come inside, and ones where Metric wasn't there at all. Hamm spread this sorting work out over a period of months.

"I suppose being a product manager has generated more patience in me," Hamm said. "It’s lightning fast to have a prototype only four months after conceiving of a product. So maybe it's affected my perception of timelines. Also, I had intellectual interest in this. I did want to learn more about machine learning and doing it myself, so there were other reasons to be patient."

His patience was rewarded again and again. "The first time I got the DeepLens to show me a frame of just me sitting in front of the camera, I felt like Tony Stark," Hamm said, referring to the Marvel Comics character known commonly by his alter ego, Iron Man. "For an actual engineer, it would feel like, 'Oh, good. Okay, move on.' For me, it was 'Yes! I'm doing it.' I had a lot of moments like that along the way."

He had two other key sources of motivation: 1) Something about the elaborateness of his cat-door project simply struck him as funny. "It was just kind of hilarious to me, to go to all this trouble for my cat. I have a great affection for silliness." 2) He couldn't think of any other way to fix his problem. Locking Metric in or out permanently was a non-starter for him. So he either needed to resign himself to more rodents appearing in his home at 3 a.m. or overcome his own self-doubt and be optimistic that he could learn skills he needed for his cat-door project.

"I thought it was too late for me to learn," he said. "I know people older than me are going to think that's really silly to think at 34, but I started thinking that at 25. So it's just kind of a brain infection that can happen. You will believe it until you really have a problem you need to solve and then you won't care anymore. So look for those problems that make you stop caring about how old you are or what your background is. It's not about understanding everything; it's about understanding enough, solving the next problem, asking for help from communities, and then moving on."

Today, after lots of learning and perseverance and plenty of pointers from online videos, documentation and engineers he knows, Hamm's home is protected by a cat door that dependably locks itself when Metric tries to come inside with a rat. He wants people to see what he did and believe they too can learn to code and even take up machine learning as a hobby.

But the lesson is broader than that, he thinks: "I'm sure there are people out there who could learn from their quilt-making friends if they had a quilting problem they needed to solve. You probably have friends who have skills that you don't know about because you don't talk about their job. But that skillset is there. I think a lot of people are very alienated from the deep well of expertise that is all around them at all times that they have access to. So get to know what your community is actually able to do, especially when you have problems."

Before joining the Amazon Stories team in 2012, Dave Quigg’s jobs included newspaper reporter, blogger, writing tutor, and stay-at-home dad.
How did you like this story?
Yawn
It's OK
It's Good
It's Great
I love it!
19 Ratings
Thanks!
Working at Amazon