Celebrating 15 years of innovation at our Development Centre in Scotland

As our Development Centre in Edinburgh celebrates its 15th anniversary, we went behind the scenes and met the team of past and present to find out why Scotland has been such a great place to invest in innovation.
By Day One Team

Based in Edinburgh’s iconic Waverley Gate building, Amazon’s Development Centre Scotland (ADCS) is responsible for devising and growing innovations that bring new levels of choice and convenience to hundreds of millions of customers around the world.

It houses teams of leading engineers, scientists, designers and product managers who work on everything from interactive user interface design to large-scale distributed systems and machine learning.

But 15 years ago, ADCS was little more than an ambitious proposal from the original founder, Matt Round. Tasked with identifying a suitable location for Amazon’s first ever Development Centre outside of the USA, Matt set about drawing up plans.

“My story with Amazon starts back in 1999, as a software engineer,” explains Matt. “I worked on Amazon’s personalisation systems in the UK. It was a time when Amazon was thinking about how to grow and expand further. We were only just beginning to explore how we could develop the distribution systems we use today.”

Why is Edinburgh a perfect location for innovation?

“I was given an opportunity to make a proposal for Scotland’s suitability for a Development Centre, so I argued that Scotland has a deep talent pool, a proud history of invention and a great environment that would make it a compelling location for innovation.”

Starting from scratch and working without much of the technology that we take for granted today, like video conferencing, instant messaging and smartphones, Matt was faced with a unique set of challenges.

“To deliver real value for Amazon, our key challenge from the outset was to make the Development Centre productive at speed in a new environment.” Matt took on a huge breadth of tasks, “everything from looking for venues and building the desks we would sit at.”

Edinburgh was selected for a variety of reasons, including the availability of candidates with high-end computer science skills. An Amazon survey of graduates at the time also found that Edinburgh came out top on a list of locations where potential employees would like to live.

However, Matt feels that ultimately the deciding factor was the city’s rich history of invention, innovation and diversity. “Edinburgh is a city where the incredible beauty of the Scottish countryside is within shooting distance, but at the same time we have this vibrant, international and multicultural group of people.”

Returning for our anniversary celebrations

To celebrate ADCS’ 15th anniversary, Matt returned after eight years to catch up with Graeme Smith, who took over as Managing Director in 2010. “It’s a lovely thing to come back so long after I handed over the reins of this operation to Graeme,” he said. “It’s fantastic to see the Development Centre flourishing.”

The canteen still has the same table tennis and pool tables that Matt bought when the Development Centre opened – but Graeme feels Matt’s positive influence on ADCS runs a lot deeper and is still felt today.

“I learned some invaluable leadership lessons from Matt. He created a culture in Edinburgh that was not like any office culture I had experienced before. For example, Matt was running Agile software development which is now routine in industry, but back then that was unusual.”

“Matt really cares about developing people and building relationships to get the best out of individuals. He always wanted the office to be a fun place to work, somewhere that’s filled with laughter.”

Graeme explains how he has picked up Matt’s enthusiasm and run with it: “We’ve grown from the original team of 35 people to hundreds of employees today. In fact we’ve just taken a lease for the third floor of this building, which will make space for 250 more jobs and we are constantly recruiting new people.”

Graeme is proud of his diverse team: “We have a lot of people from Scotland and other parts of the UK, but also many nationalities and languages spoken from Europe and all over the world. Edinburgh is a world class capital city – a great place to live, work and build a career in technology.”

ADCS makes good use of the city’s strong tech ecosystem and high-quality local universities, as Graeme explains: “Edinburgh University in particular has been a tremendous partner, while Edinburgh School of Informatics is a world-leading institution and an important partner for the Centre.”

With the rapid development of technology in all sectors, what keeps Graeme and the rest of the team at ADCS busy these days?

“One of our priorities is to make better shopping recommendations for customers by helping them to discover products they would not find otherwise. Recently, we’ve applied some of the latest deep learning techniques to this problem and we’re seeing some fantastic results. Customers are increasingly engaged with these recommendations.”

Graeme feels that the importance of diversity is a running theme throughout the history of Amazon and ADCS. “For us to serve hundreds of millions of customers worldwide, we have to empathise with them and understand their needs. The diversity of our workforce unlocks that door. Culturally, this is a place where we are obsessed with innovating on behalf of customers. If you love to invent, this is a place where you can do that and have fun at the same time.”

Matt agrees, adding: “ADCS offers you the opportunity to work on fascinating, world-class projects that have the real potential to change the lives of millions of people. And you get to do that in a great workplace and a city anybody would love to live in.”

Over a coffee, Graeme and Matt turn their minds to what the next 15 years of innovation in Scotland might look like.

Graeme explains that he wants ADCS to be part of a golden age of British computer science in the next decade: “we have the staggering computational power of data and machine learning to find patterns that help us to make better decisions than ever before – whether that’s serving up personalised recommendations, running the business more efficiently or improving forecasting. But this technology will apply to so many other areas, for example I’m really excited about how wearable devices can transform healthcare. We’re starting to see the incredible power of this technology across all industries.”

Matt feels the potential is limitless, and he’s excited to see what the next 15 years hold in store, adding: “We have only seen a tiny fraction of the potential of ADCS. The technology is reaching maturity, the data is reaching critical mass and these capabilities are reaching the tipping point of scalability.” 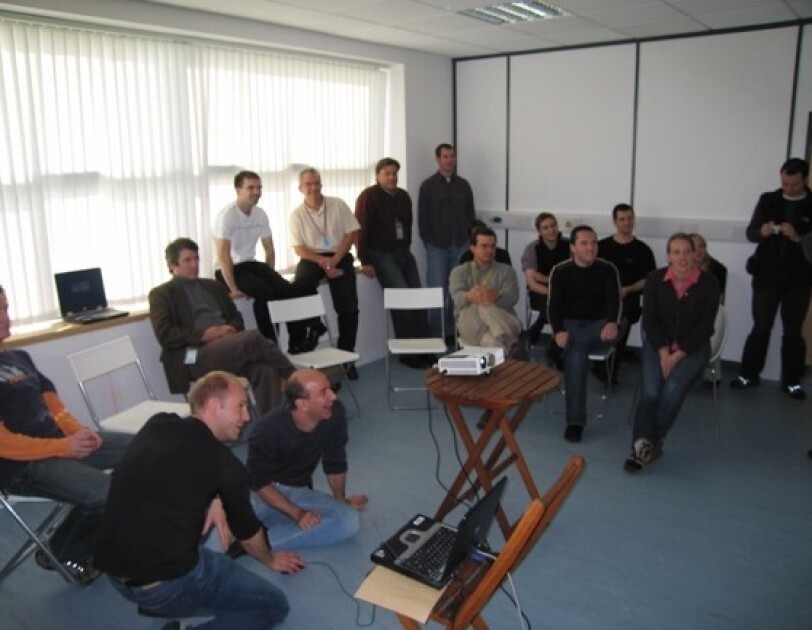 Jeff Bezos, Matt Round and the rest of the original team pictured back in 2004 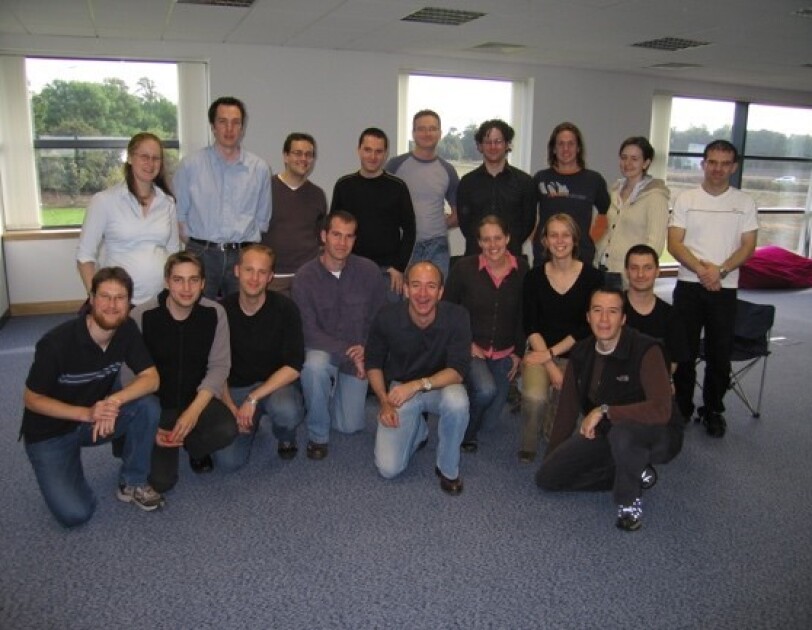 Jeff Bezos, Matt Round and the rest of the original team pictured back in 2004. 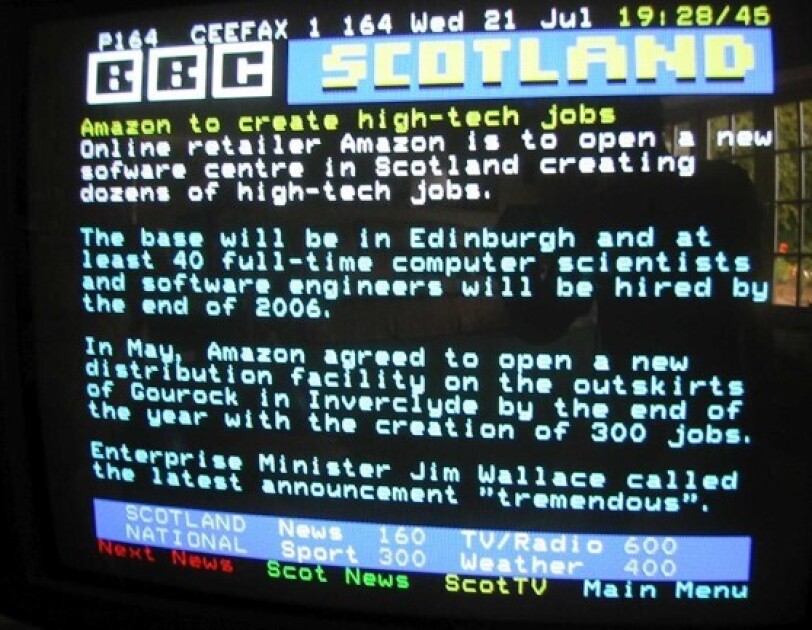 Blast from the past: how Teletext first communicated news of the launch. 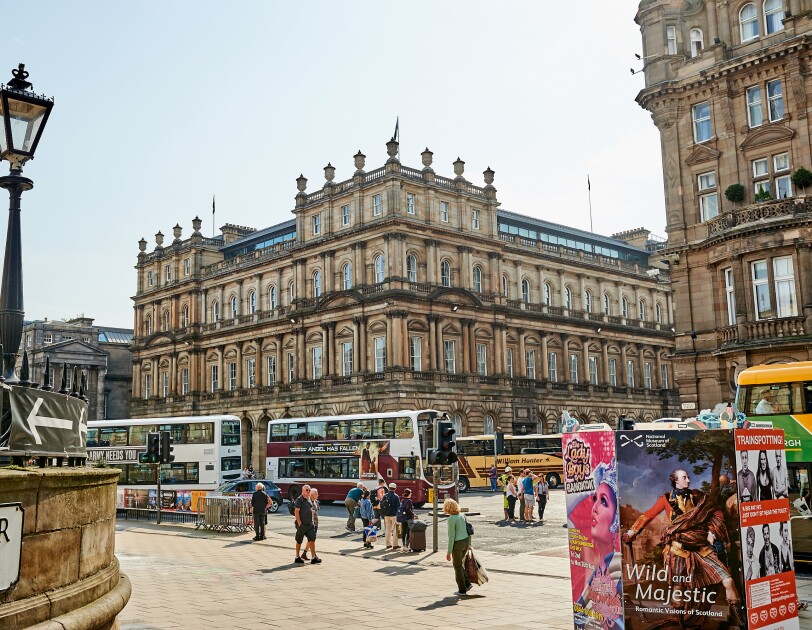 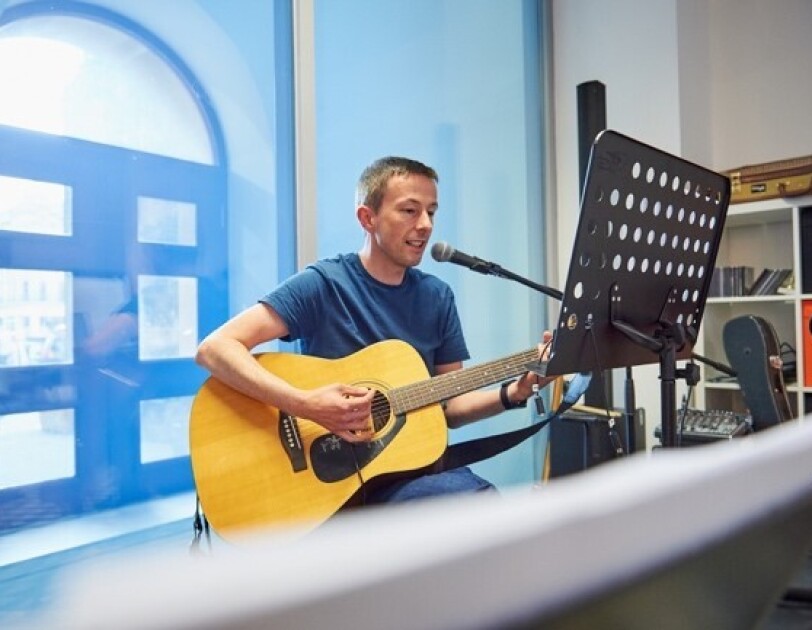 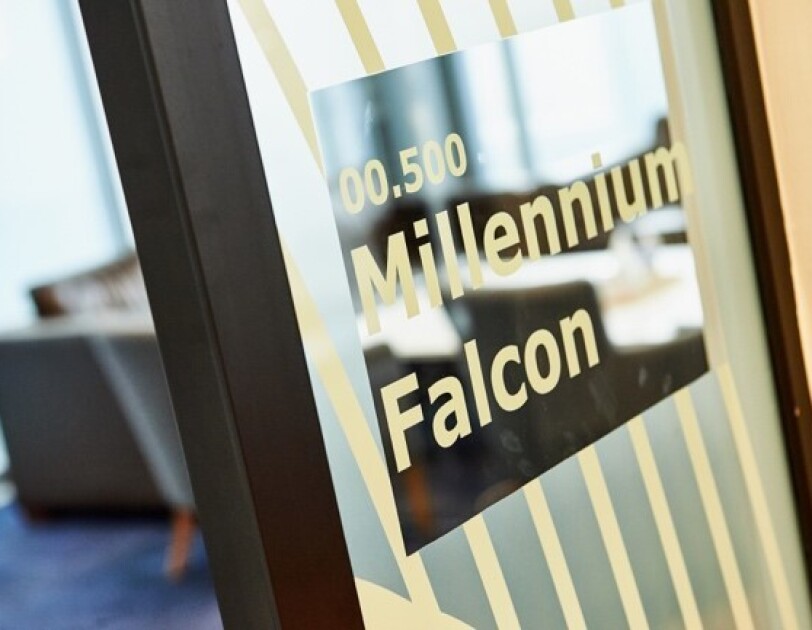 Staff members were given the chance to name rooms… sci-fi proved popular! 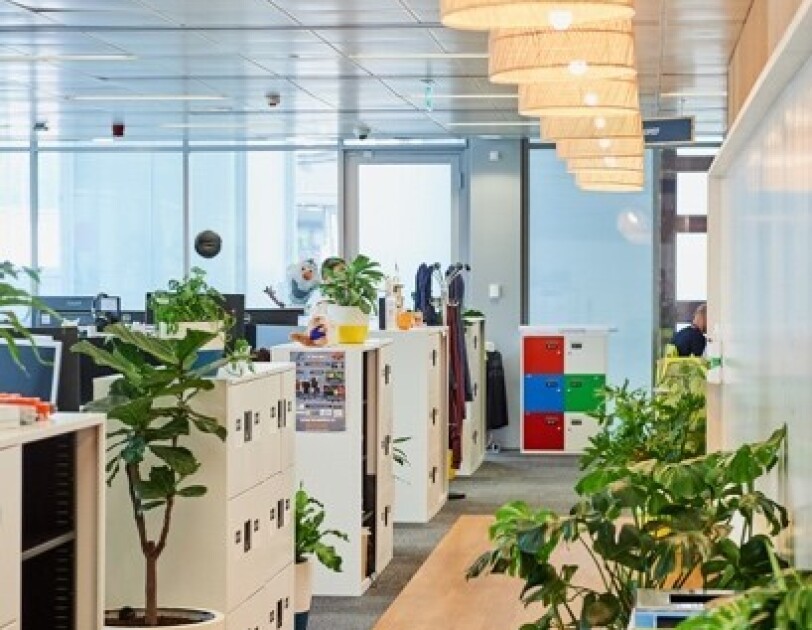 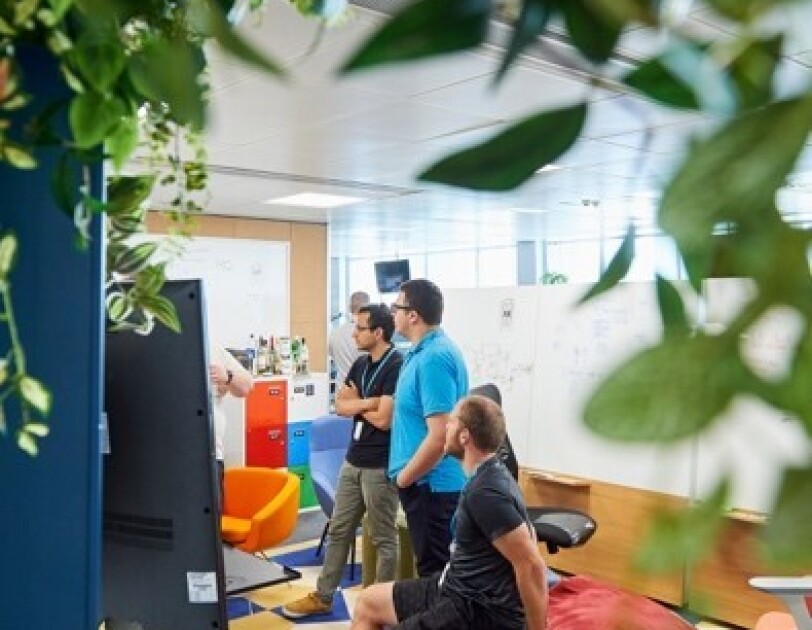 ADCS was one of the earliest large organisations in the UK using Agile processes. 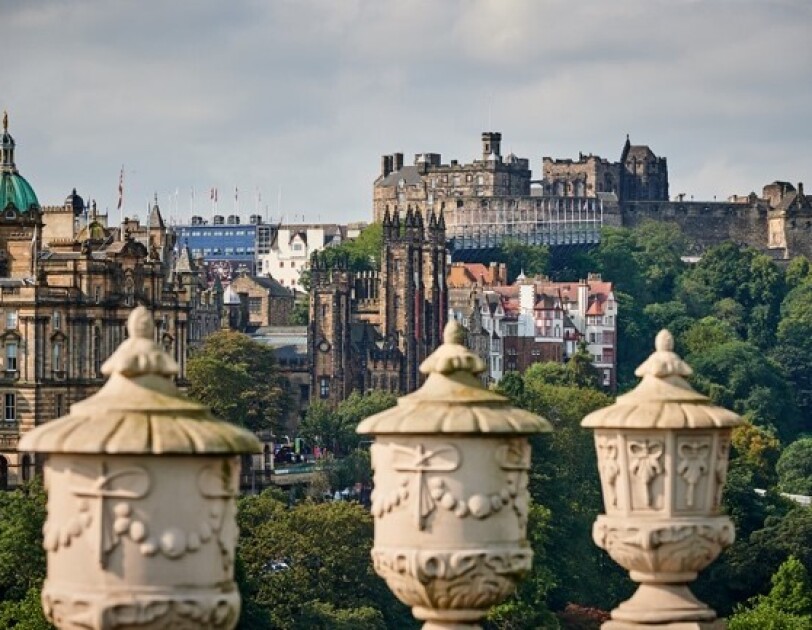 Spectacular views of Edinburgh from ADCS’s rooftop are available to all employees.

Being part of the Community

A host of initiatives designed to support local communities and businesses have sprung up from ADCS over the years, proving that Amazon’s roots run deep – not just in Edinburgh, but throughout Scotland.

“We have always worked hard to deepen our roots in the local community and Scotland overall,” added Graeme. “That’s why we’re running a number of programmes that aim to foster greater diversity in the city’s tech talent pool, help Scottish small businesses and independent authors reach new audiences around the world and to address urgent needs locally such as child hunger in schools. We are always keen to do more.” The Amazon Women in Innovation Bursary, for instance, encourages women to pursue STEM careers by providing university funding for female students to take up degrees linked to the technology industry. The programme, originally created by Graeme, has helped a number of female students take up degrees at Edinburgh University. Claire Doherty, one recipient of the bursary sums it up: “The world of technology is changing so quickly. Who knows where we will be in 10 years? There are so many possibilities. I want to help build that future.”

Amazon has also acted as headline support of the Scotland Women in Technology Awards, which recognises and celebrates tech talent across the country.In partnership with Scottish Enterprise and Scottish Development International, Amazon Academy gives small businesses and entrepreneurs across rural Scotland free access to practical advice on growing their businesses online. Featuring independent experts like Emma Jones MBE, founder of Enterprise Nation, and Parveen Thornhill, regional director for the Department of International Trade, speakers at the events enable SMEs, entrepreneurs, and tech start-ups to boost their exports by embracing e-commerce. And for younger generations, Amazon’s Future Makers programme runs in primary schools across Edinburgh. The programme inspires young people to engage with engineering and technology before they enter secondary school. ADCS senior product manager Ellie Trotter helps with the programme and explains: “Future Makers is about showing them the wealth of opportunity available in the tech industry in a fun and memorable way.”

Staff from ADCS also work in partnership with children’s charity Magic Breakfast in Edinburgh and across Scotland. Magic Breakfast serves breakfast to children who arrive at school too hungry to learn, giving them a healthy start to the day. Amazon funds Magic Breakfasts in five schools in Scotland – two in Edinburgh, one in Glasgow, one in Dunfermline and one in Gourock. 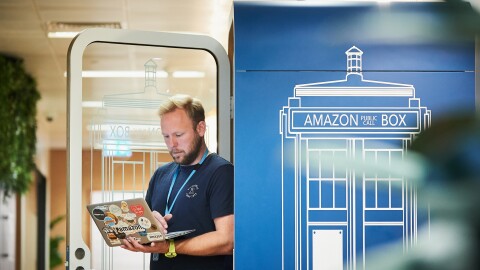