The football league turning lives around

A ball can change a life. That’s the affirming mantra of the Irish Homeless Street League - a football league established with the goal of transforming lives by giving displaced people a sense of purpose and inclusion. Amazon Web Services (AWS) in Ireland recently sponsored the annual finals, and employee volunteers discovered a sense of community they’ll never forget.
By Day One Team

Almost 300 players converged in Tallaght, Dublin, for the Irish Homeless Street League (IHSL) All Ireland Final in April, the apex of 12 months’ hard work and dedication. A total of 24 male, and five female teams competed from local leagues across the country.

Their goal? To walk away with a trophy, and the chance to represent Ireland, in the Homeless World Cup in Cardiff, Wales, later this year.

The IHSL began life back in 2003. Sean Kavanagh, editor of Ireland’s Big Issue Magazine, which offers employment opportunities to people in poverty, spent large amounts of time working with young homeless people. He was chatting to a boy who’d spent the majority of his life in care homes, who told him that he’d always wanted to play football but had never had anybody to teach him.

There and then, Sean decided to take an Irish team to the Homeless World Cup in Austria. It proved to be a life-changing experience. But the comedown of returning home to all of the issues that they’d left behind was hard. Many of the team didn’t know where they’d be sleeping that night. So Sean determined to set up an Irish league - a place where the players could meet on a weekly basis; an anchor point in their turbulent worlds.

Kevin Leavy has been volunteering with the league for the past six years. As one of the directors, he gives endless hours of his own time, spurred on by the difference that the league makes to so many lives.

“Playing once a week doesn’t seem like much, but to the participants, it’s huge,” he explains. “It’s about dipping your toe back into society again.”

The teams are made up of people who’ve experienced homelessness in the past two years, people on addiction programmes, ex-offenders, long-term unemployed, and migrants in holding centres, with no recreational facilities.

The rules at the league are strict. Players understand that they must turn up to training each week, on time and substance-free.

Plus, the main goal for many is to be chosen to represent their country in the annual Homeless World Cup. Each player will only get the chance to go once, ensuring that more hopefuls have the opportunity to participate. Players are chosen based on the willpower, and dedication, that they’ve demonstrated throughout the year - a massive incentive that’s proven life-altering for many.

“Society tends not to associate perseverance, and persistence, with people in these situations,” says Kevin. “But they keep on coming back.”


Research has shown that over 70% of players participating in the Homeless World Cup experience significant life change, from overcoming addictions, to repairing relationships, to finding homes, and jobs.

And Kevin knows the personal stories behind the statistics: “There’s a former player turned coach, who’s now doing a degree in youth work; a woman, who after many lost years, represented Ireland as a clean grandmother; and a guy who hit rock bottom, but with the help of the league, is now an artist,” he says.

One of the pillars of Amazon’s global community programme is ‘Right Now Needs’, ensuring the company focuses a number of its volunteer efforts around hunger, homelessness and disaster relief.

A team of Amazon Web Services employee volunteers from the company’s data centre in Tallaght helped the IHSL prepare for the big day, as well as at the tournament itself. The event, and the diversity of people involved, opened their eyes to the nature of homelessness.

There was a team of Brazilian migrants from Galway; the winners of the women’s finals were the Sport Against Racism Ireland team, many of whom play in hijabs; while the winners of the men’s competition were a group from the traveller community in Mullingar.

Respect is at the very heart of the spirit of the day, with a healthy dose of competition. And this year’s final closed with a ceremony given the gravitas it deserved, with awards presented by football royalty Niall Quinn, former international professional footballer, and Stephen Kenny, manager of the Republic of Ireland Under 21s team.

In the spirit of the league’s year-round approach, AWS is now looking at further ways for its employees to volunteer with the league. Aside from supporting the players at their regular games, they’ll also help them to continue on their journeys of reintegration and stability, with help on CV preparation and job interviews. Plus, the AWS soccer team in Dublin is excited about setting up a friendly with IHSL’s local team soon.

After all, as Kevin puts it: “It’s sport at the end of the day,” and there could be no better way to bring the local community together than with the Beautiful Game. 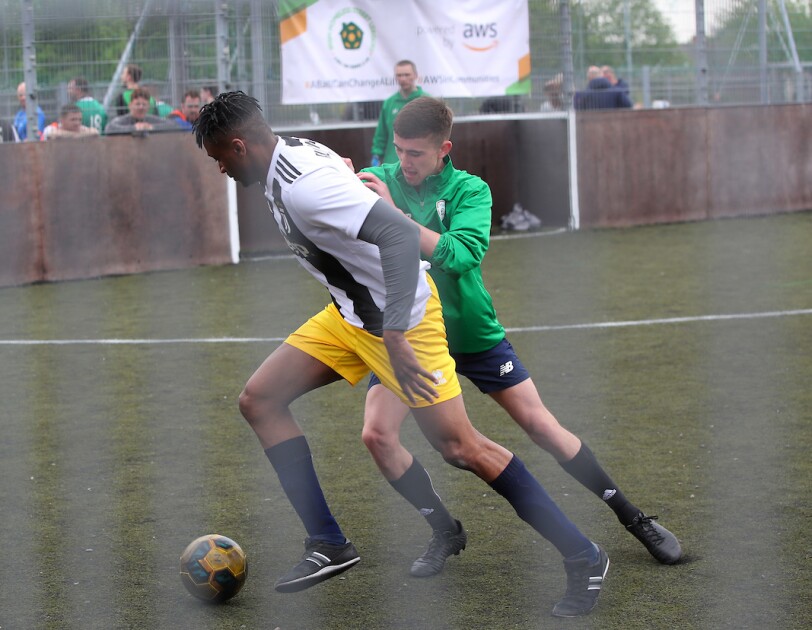 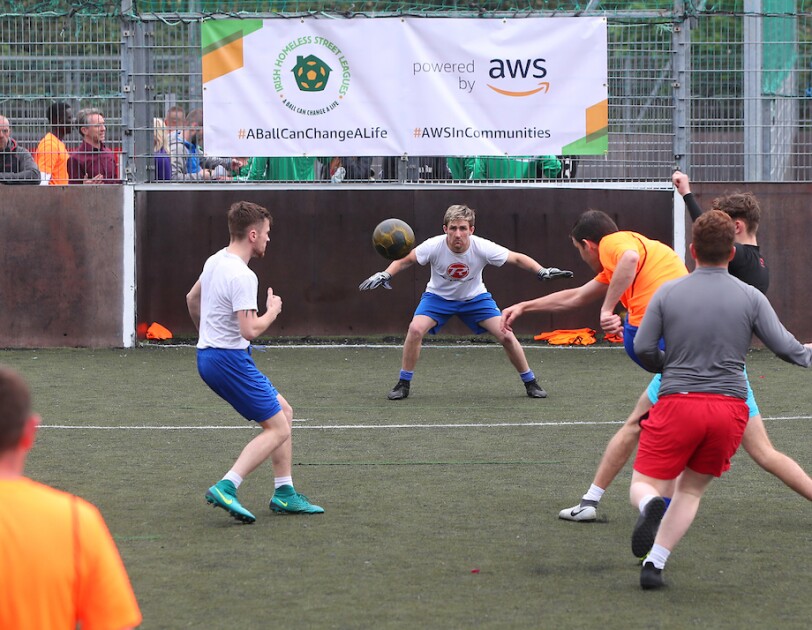 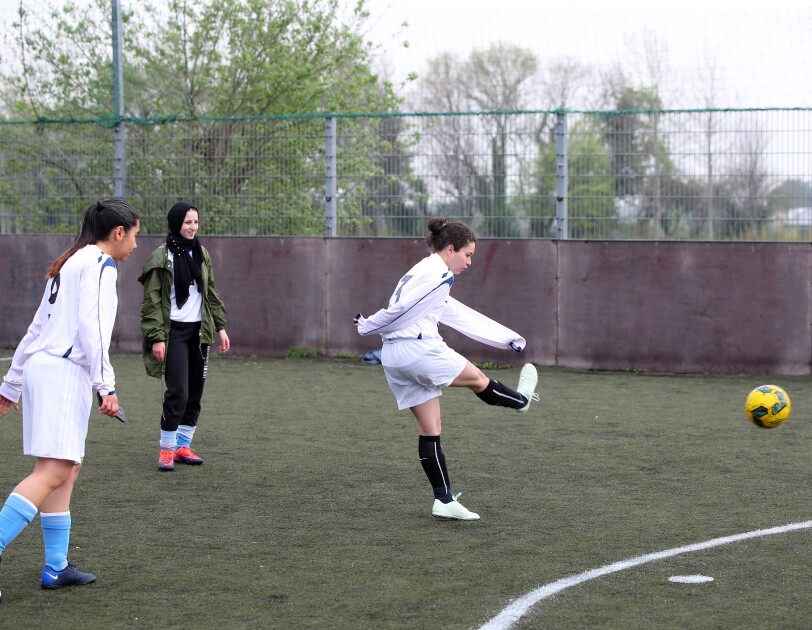 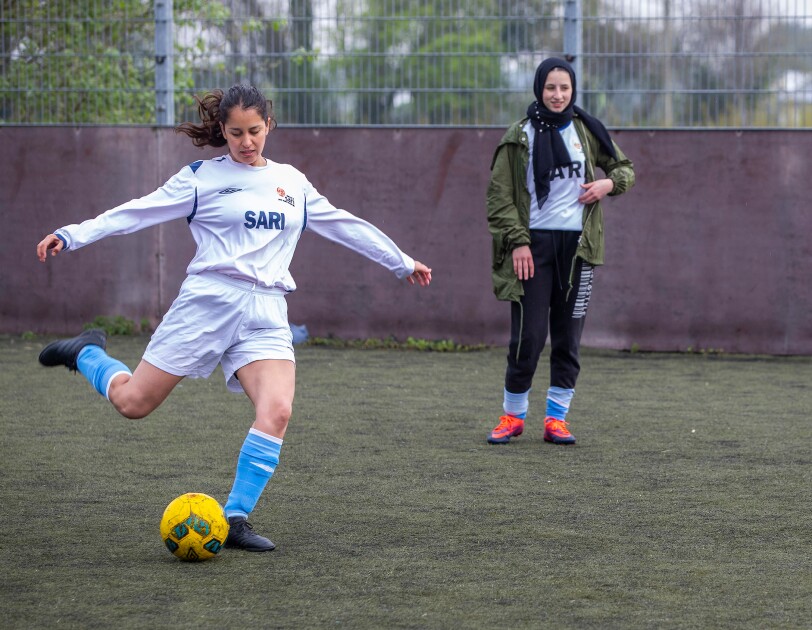 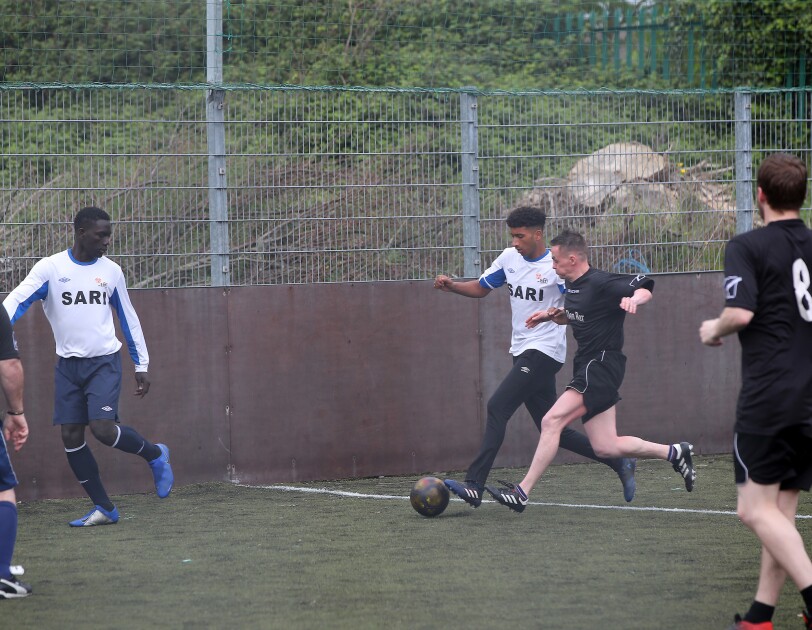 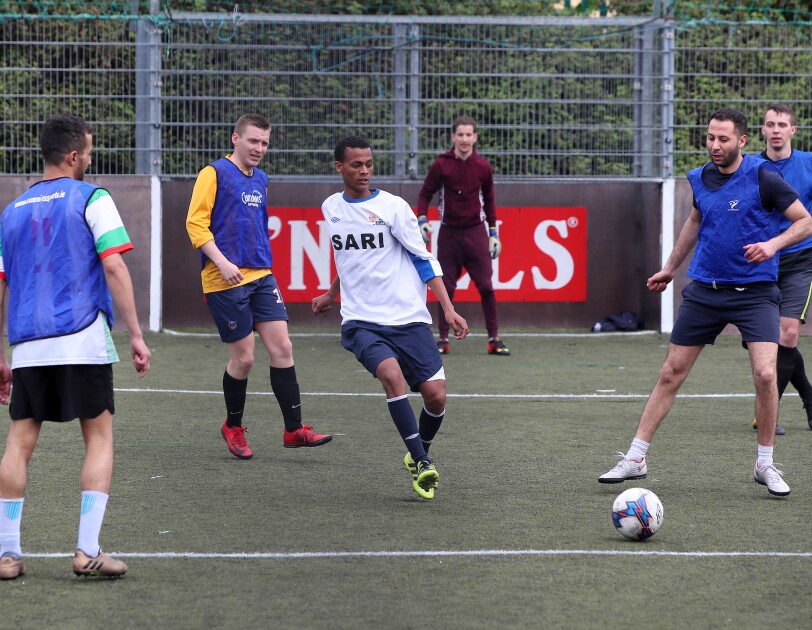 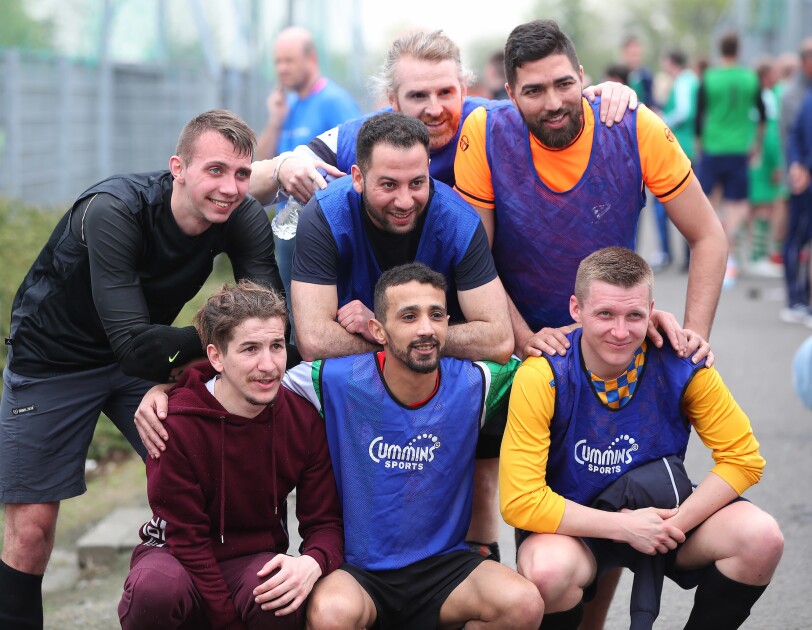 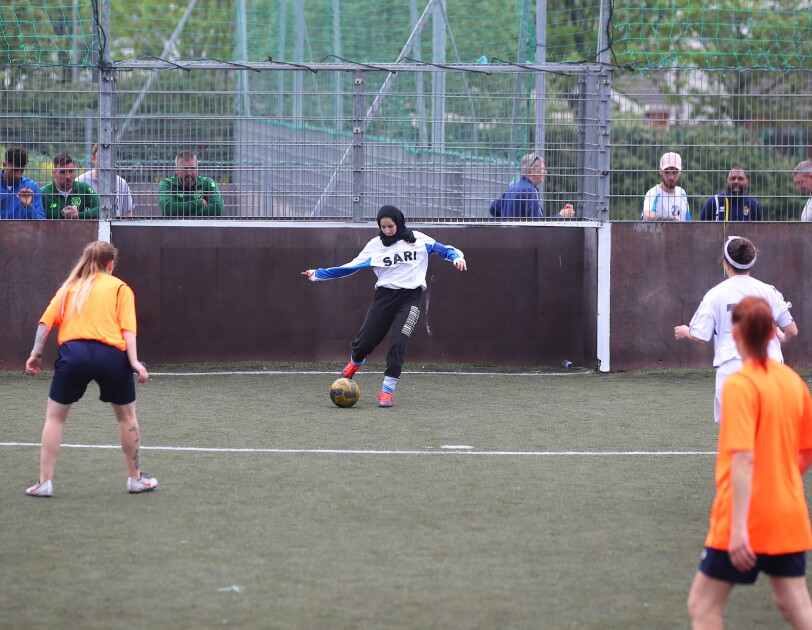 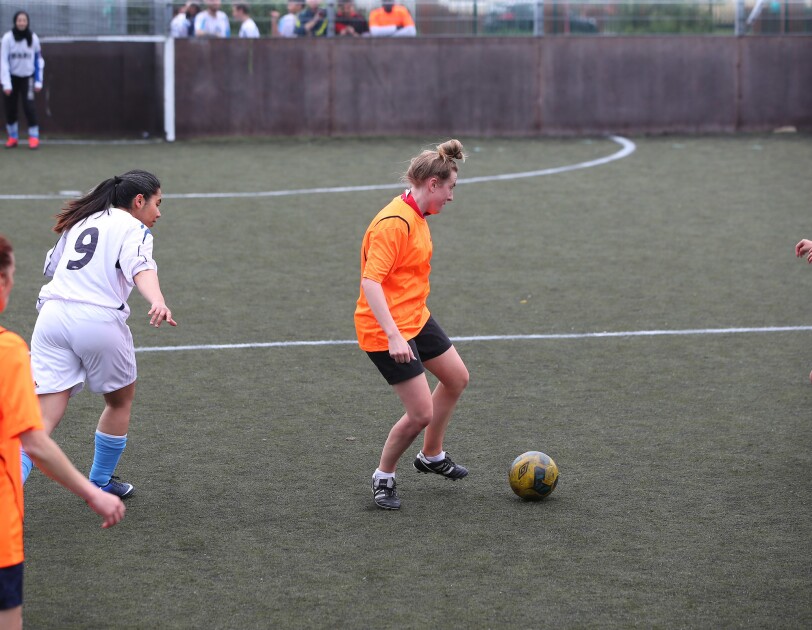 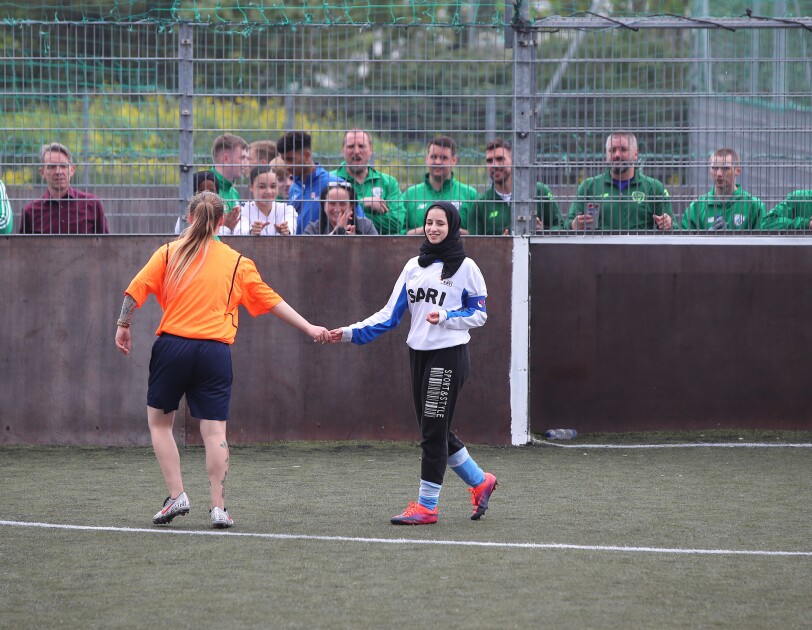 Photo By Marc O'Sullivan
Supporting communities
How did you like this story?
Yawn
It's OK
It's Good
It's Great
I love it!
15 Ratings
Thanks!
Working at Amazon 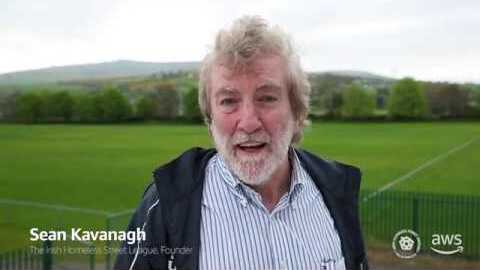 The football league turning lives around