From the Italian Association for Cancer Research and Amazon, a virtual hug for mothers

During the Covid-19 emergency, the “Hug her with a flower” project was born, to bring the AIRC Foundation’s Azalea for Research into the homes of all mothers and continue to support research relating to tumours affecting women.
By Day One Team

The sweet and powerful scent, along with an unmistakable explosion of colours – pink, fuchsia, red and white – which overwhelms the eyes and the heart: since 1984, it simply isn’t Mother’s Day in Italy without the Azalea for Research of the AIRC Foundation (the Italian Association for Cancer Research). The distribution of the azaleas supports research into tumours affecting women. “For the first time in 36 years, due to the Covid-19 emergency, we have had to cancel the usual event which takes place in many Italian squares on the second Sunday in May,” explains Niccolò Contucci, General Director of the AIRC Foundation.

Even during an emergency, we must not give up

“This year, in the extraordinary game of Monopoly that we call life, we’ve drawn a terrible ‘Chance’ card.” And what chance: a pandemic bringing imposed isolation and social distancing. “When the first cases in Italy were reported in the news at the end of February, we had a suspicion that we’d end up under lockdown, total closure, and that our 20,000 volunteers wouldn’t be able to get down to the town squares on the 10th of May. So, we asked ourselves how we could safely distribute our flowers.” Giving up was not an option. “We owed it to all the mothers, to all the women every year who are taken ill with a tumour,” Niccolò explains.

This year, AIRC had planned to distribute more than 200,000 azaleas. The order had been made two years in advance, because the plants need time to grow. For the same reason, that is, because they are living beings, postponing the event in the town squares to September became unthinkable: by then, the azaleas would have lost their petals. “In short, a disaster: it wasn’t just about saving a symbol, but more than that about being able to guarantee that the research receives the funds which were expected to be generated from this day.”

A perfect combination: the AIRC’s azaleas, the experience of Amazon

At that point, the challenge became how to distribute the plants anyway. A backup plan was needed. Contucci carries on: “We had the idea of distributing them online. Thinking of Amazon was the following step: who could an organisation like ours, which has donated more than 1.5 billion euros to oncological research since 1965, contact, if not a company which has made online commerce its crowning glory?” No sooner said than done. “We presented the project with a simple email, without mincing our words too much. In record time, a firm ‘yes’ came back from Amazon, and we immediately started working on a strategy and a dedicated communication plan,” Niccolò explains.

“The thing I liked the most about Amazon’s culture was their reaction to our proposal, and the fact that I never heard anyone say: ‘This can’t be done.’ The attitude was always: if there’s a problem we’ll find a solution, there’s always an alternative. I see great parallels between this and the principles and spirit of AIRC: our volunteers throw everything at any obstacle they find in their way, every day.”

For example, one problem to solve was how to transport a delicate product like an azalea without ruining it. In the town squares where they are normally displayed, the plants arrive packed in standard boxes. “However, with online distribution we needed to think, and quickly, of new individual packaging, which could prevent the flowers from spoiling, and stop the soil from falling out. But we managed to do it.”

That’s how “Hug her with a flower,” the joint project of AIRC and Amazon, came to be, with the essential support of carrier BRT. Together, they collaborated to make the traditional Mother’s Day event with the Azalea for Research happen. With one difference: this time, the square is virtual, and the flowers have found a special showcase with a dedicated page on Amazon.it, on the Airc.it website, and in the media, for the whole month of May. 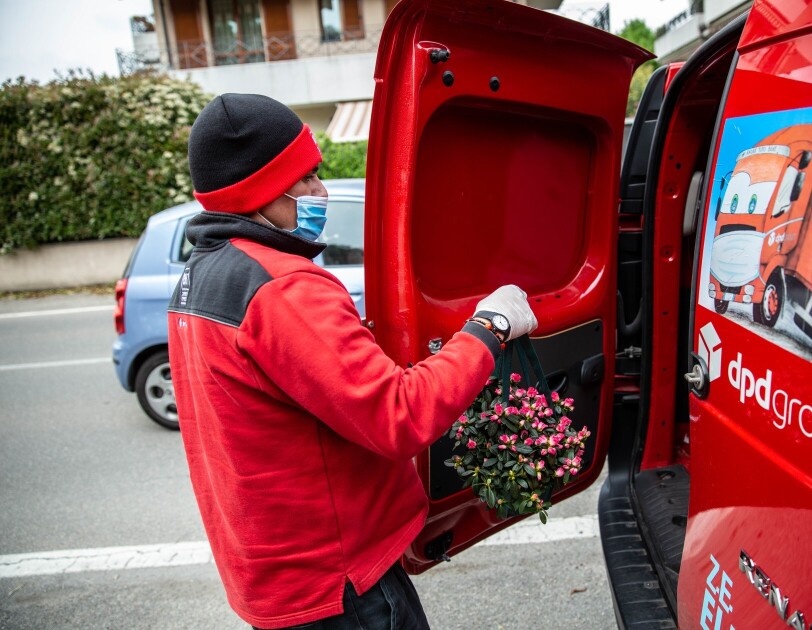 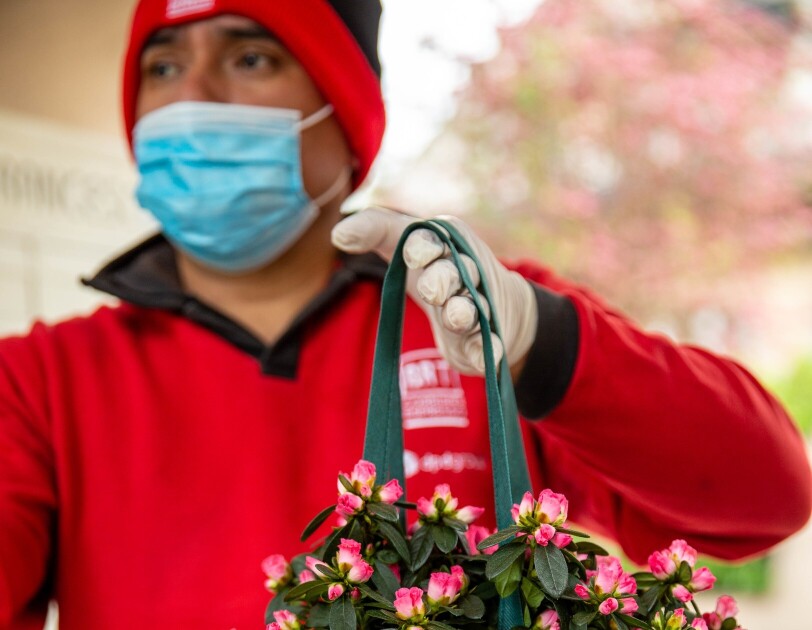 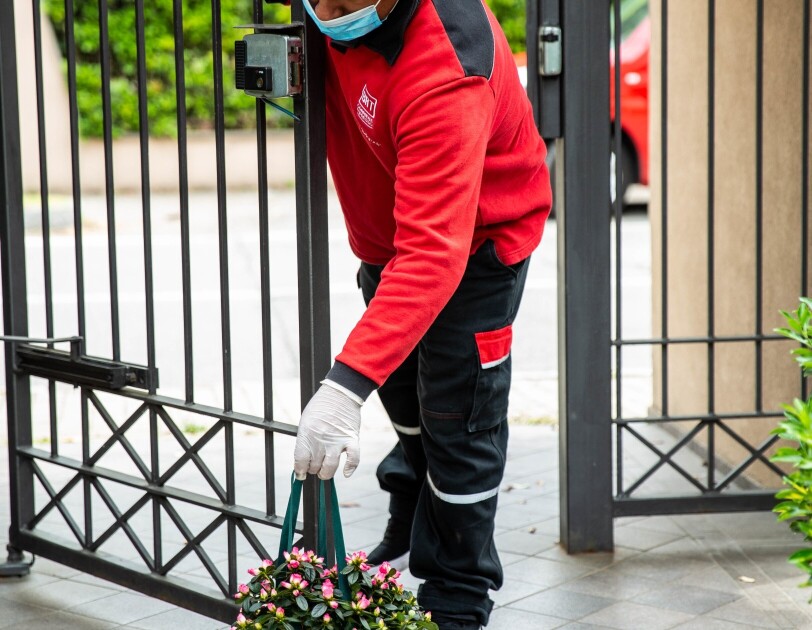 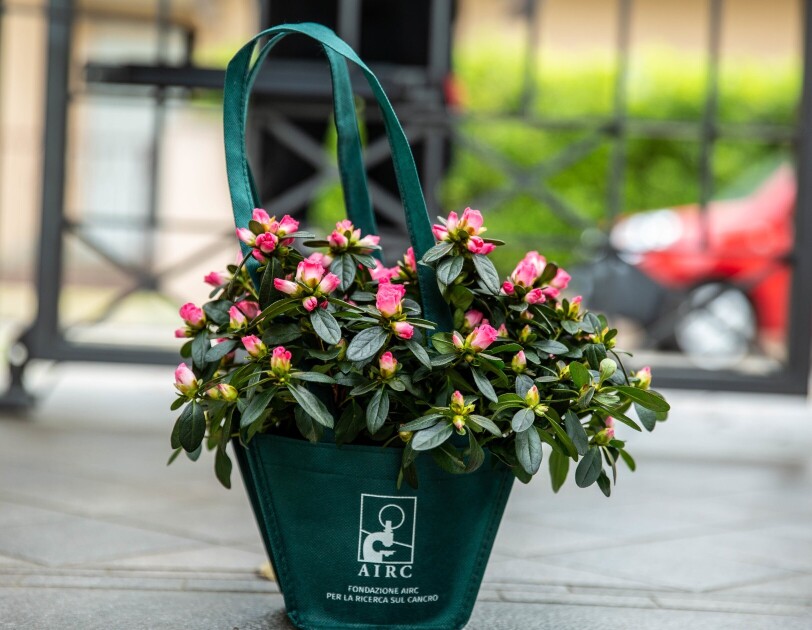 A hug, the most natural and instinctive gesture between mother and child

“This year, with one click and a donation of 15 euros, our azalea has become a symbolic hug to mothers (and all women) throughout Italy.” A gesture which has extraordinary power, in times like these. “I am originally from Montepulciano, in Tuscany, but I live between Rome and Milan. It’s been two months since I’ve seen my mother, who lives alone and is quite old. Sending her an azalea was a way to make her feel closer to me. How many people in Italy are in the same situation as me? How many children would like to hug their mothers?”

The name chosen for the initiative, “Hug her with a flower,” is in itself a statement of intent: “It’s a reference to the most natural and instinctive gesture between mother and child, the first form of communication and love which we learn, and which today, because of the Coronavirus, is forbidden. But, thanks to Amazon, we have found a way to hug our mothers anyway, albeit virtually, and to say to them all: Happy Mother’s Day, Mum!”

COVID-19
How did you like this story?
Yawn
It's OK
It's Good
It's Great
I love it!
7 Ratings
Thanks!
Amazon Web Services 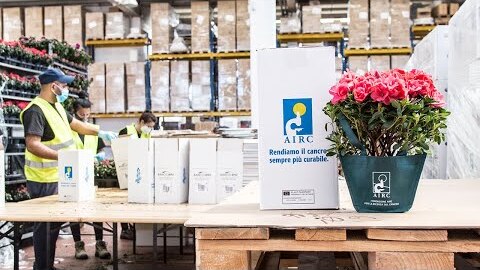