Determined, tenacious and with an enviable grade average: Beatrice Occhiena and Rania Zaed, both in their twenties, are the winners of Amazon's Women in Innovation Scholarship in Italy, aimed at the brightest university science students. But don’t you dare call them nerds!
By Amazon Stories

Beatrice has always preferred floppy disks over dolls. "It was all thanks to my grandfather, Antonio, an aerospace engineer who was passionate about computer science. As a child I spent a lot of time with him. Sitting on his knee, we would play on the PC or play logic games. I really miss him." Now that Beatrice Occhiena has grown up, grandfather Antonio would be proud: now twenty years old, she is in her second year of Computer Engineering studies at The Polytechnic University of Turin, with a high grade average.

"It seems easy to say, but I am a person who has to really work hard. I’m no genius, I just persevere," she says modestly. "I, on the other hand, could not learn my times tables in year two," adds Rania Zaed, also in her twenties. Rania, her large smile framed by her hijab, is in her second year of Mathematical Engineering at Milan Polytechnic with good grades. 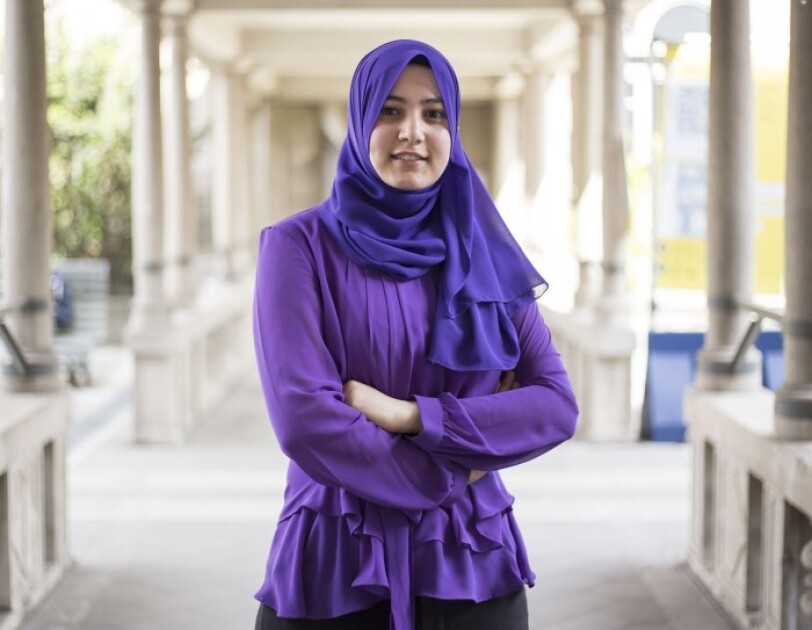 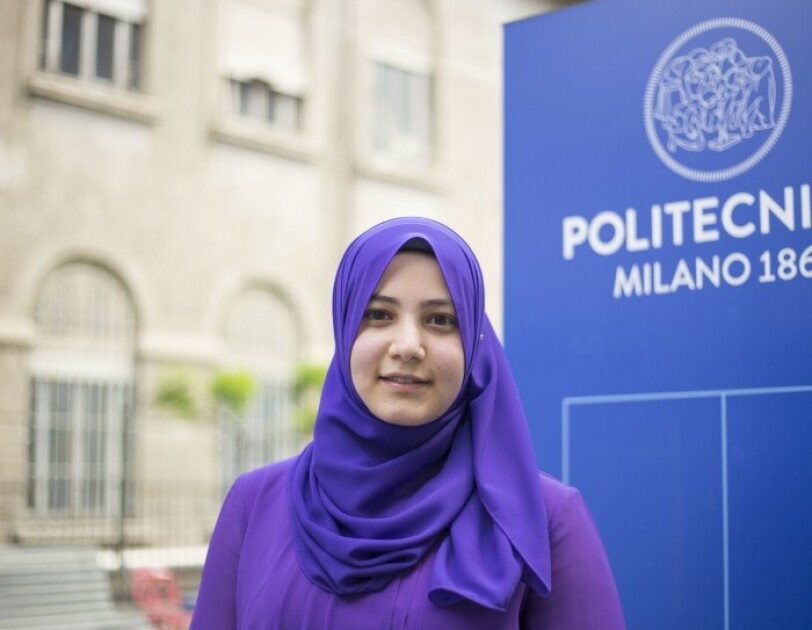 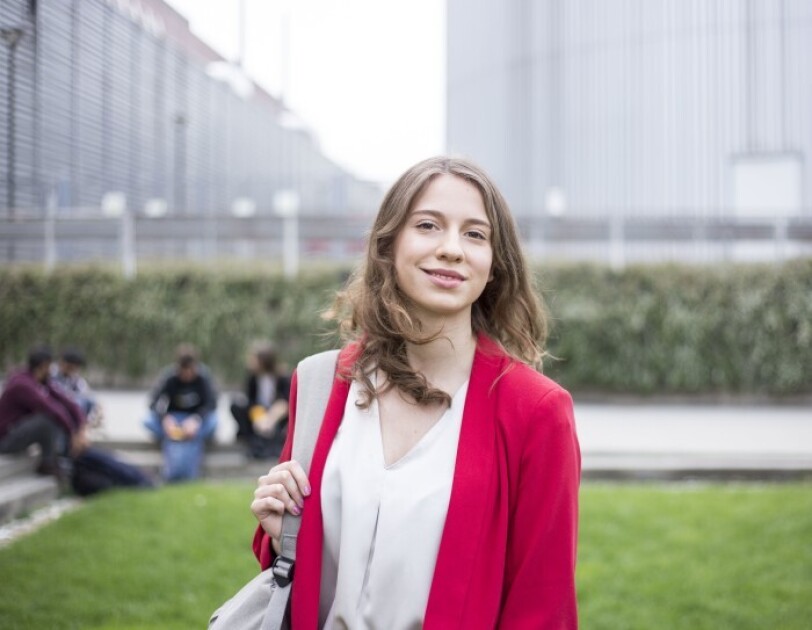 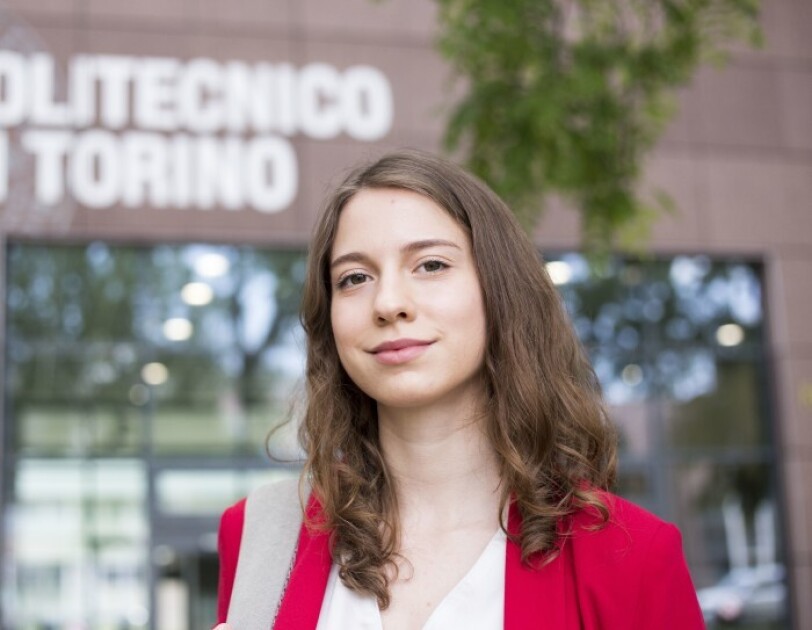 A scholarship to support female innovation

Beatrice and Rania are the two winners of the Women in Innovation scholarship, promoted by Amazon and aimed at the most deserving female university students in the STEM disciplines (Science, Technology, Engineering and Mathematics). The grant guarantees the winners, selected on the basis of merit and income, an annual financial support of 6,000 euros for three years, and the support of a mentor chosen from the Amazon managers, to ask for advice. The programme was launched in 2018 in collaboration with the Milan and Turin Polytechnic Universities to support study and career paths in the field of innovation and technology. Three new scholarships will be awarded next year, extending the initiative to the 'Tor Vergata' University of Rome.

Beatrice and Rania were among the many applicants this year. "I used part of the money I received to pay for books, media subscriptions, the canteen and a new computer as I’d had mine for ten years,” says Beatrice. "Same for me," echoes Rania. "But I also plan to take a course to improve my English." "I instead focused on the gym. What do they say? Mens sana in corpore sano,” smiles Beatrice. This scholarship represents enormous satisfaction for both girls, in a field where the presence of women is often very low. "There aren’t many of us, but we are as good as our male companions...maybe even better," they answer in unison, like long-time friends. "And to think that before this scholarship we didn't know each other."

Beatrice and Rania could not be more different. Beatrice was born and raised in a big city, Turin, with a mother who taught literature and a computer technician father. Rania, on the other hand, lives in Mozzate, a small town in the province of Como, with a housewife mother and a father who owns a car wash. "My parents emigrated from Egypt 30 years ago and have bet everything on us children," says Rania. "I have two brothers who are about to graduate in economics and medicine respectively. Since we were little, my parents insisted that we study: ensuring a good education was their mission; they made a thousand sacrifices."

Rania gives it everything: she does well at school and then chooses a grammar school: "It allowed me to discover the foundations of Italian and European culture, which still didn't belong to me completely." Then, in high school, Rania had a shock. "I fell in love with numbers thanks to my maths teacher who was the first to encourage me, along with my family, when I decided to enrol in engineering, while many tried to dissuade me from a choice that was not 'for girls'." But it was an uphill struggle. "I was behind my classmates who came from scientific studies. I didn't give up: I studied every day until I caught up." Caught up, and then some: today Rania is one of the top students on her course and, moving forwards, she dreams of working in finance.

"She has everything it takes," says her mentor, Stefania Vele, 36, Vendor Services Manager at Amazon. "I was impressed by Rania’s determination with which she follows her goals and the fact that she is not afraid to work to achieve them," she explains. "It reminded me of myself a few years ago: we share the same passion for complex problems and a basic composure in approaching them." Rania agrees: “I really felt understood by Stefania. She is a strong and accomplished woman at work, but kind and helpful, and a great inspiration."

"What I like about my mentor is her ability to be tenacious without appearing arrogant. Her advice is invaluable to me, like that of an older sister," continues Beatrice ,talking about Ilaria Zanelotti, 39, head of Amazon Italy’s Marketplace. "Beatrice does not need much advice, I do very little," she smiles. "She has clear ideas about the path she has decided to take."

The future is a perfect equation

So, Beatrice, what are you gonna do when you grow up? "Something in the field of artificial intelligence, I'm a total nerd," she says. "A nerd with a passion for 80s music, Japanese comics and shopping... study permitting, though. As I said, I have to work hard." In reality, even for Beatrice the moments were not lacking: "At the age of 14 I had chosen classical studies, but I was not happy. I was desperate, I thought I couldn't fix it. My mother made me understand that everyone can make mistakes, the important thing is to get up and start over," recalls Beatrice. "It had happened to her too: she had enrolled in physics, only to realise that her true passion was literature, so she changed her studies. She is a role model for me."

"My mother is my best friend," smiles Rania. "I have a lot of respect for her. She is a strong and smart woman. She teaches me to appreciate the small things, to face problems with composure and courage and to be patient because, as you say, it takes time and dedication to achieve success." Where do you see the two recipients in ten years? "Fulfilled in work and with a family," they respond without hesitation. The formula for happiness, it seems, is a perfect equation between mind and heart.

Women in techSupporting communitiesItalyAmazon Stories
How did you like this story?
Yawn
It's OK
It's Good
It's Great
I love it!
Thanks!
Amazon Web Services

Launching in London, Amazon’s new hair salon will be a place where customers can experience some of the leading technology, products and services in hair care and styling.
Continue reading
X
Out for Delivery
Thank you!
Please try again
Quick news and rich insights from inside Amazon, delivered directly to your inbox every few weeks.
Check your inbox shortly for your very first Out for Delivery email. We’ll reach out every few weeks with more.
If you’re not redirected back to the blog in a few seconds, click here.
Looks like we had some trouble authenticating your entry. Let’s try again...
Amazon Privacy Policy | Opt out anytime
We use cookies to enhance your visit to our site.
Accept & Close