A time for kindness: the Italian Red Cross and Amazon working together

Bringing necessities and medicine to the elderly, transporting the ill and providing psychological support to the lonely: the Italian Red Cross’ project called Tempo della Gentilezza (Time for Kindness) is the first line of support for those most vulnerable, and now it has the support of Amazon.
By Staff Storie di Amazon

When the COVID-19 emergency called, the Italian Red Cross (CRI) answered. And it did so in its own way, with Time for Kindness, a show of solidarity and care involving hundreds of volunteers. The goal? To guarantee, at this critical time, that there is support for those most at risk, like the elderly, the immunocompromised and disabled, through services like grocery deliveries, transport of the ill and the delivery of medicines and other necessities.

A concrete show of solidarity, made up of small and big acts every day, which has reached over two million people across the country: the elderly man who lives alone, the cancer patient at risk of contracting the virus, but also children in paediatric wards, isolated during the toughest weeks of the pandemic, who have been entertained by CRI volunteers with socially-distanced storytelling and games. A project with enormous social impact, to which Amazon has contributed with special support and a €500,000 donation, split between the CRI branches in Veneto, Piedmont, Bergamo Hinterland, Piacenza, Cagliari and Rieti, which operate in the communities and territories in which Amazon employees live.

In the eye of the storm

Among the Italian Red Cross volunteers who are still on the front line is Antonio Tagliente, 59, born in Palagiano, in Taranto, but “proudly from Bergamo for the past 50 years,” as he puts it. Antonio has done everything over the years: police officer, paratrooper, diving instructor, judo teacher, expert in mountain rescue and banker.

Restless by nature, he has always had one constant through it all: the Red Cross. “They’re my second family,” he explains. “I joined the association in 1994, after having witnessed a car accident. I didn’t know how to help and all I could do was call the emergency services. Since then I decided that, in the future, I’d always know what to do in certain situations, and I became a volunteer.”

Today, Antonio is the local delegate for CRI emergencies in the Bergamo Hinterland and Capriate San Gervasio area, at the heart of the crisis that has been unfolding in recent months. It is his job to coordinate teams of members in the region, roughly eighty people. “Along with other CRI colleagues, we decide who to send, where, when, and why.” When he says it, with a laugh and a joke, it seems like child’s play, but in this time of a global pandemic, it becomes a gargantuan task.

“Since the end of February, for two and a half months, we’ve found ourselves in the middle of a storm, the likes of which we’ve never seen. Our toll-free number was getting hundreds of calls every day, with a huge variety of requests: from delivering food to elderly people or families going through financial difficulty, to providing oxygen tanks for those with COVID-19 who were being treated at home, or getting masks and gloves to disabled children. And more still, from transporting those infected who were undergoing bio-containment to providing psychological support to those who, during the lockdown, were suffering a crushing loneliness,” Antonio explains.

“Our volunteers have approached the task with full enthusiasm: if there weren’t enough cars to make the deliveries, they went house-to-house on bicycles. When there weren’t enough cover-alls to safely enter the houses of people who had contracted the virus or were under quarantine, we asked the Fire Brigade for help.”

Fearless, and full of hope

The motto: Nurturing hope. “It hasn’t been easy. We have also lost four volunteers, four friends, due to the virus. However, the desire to keep going continues to be stronger than all else, stronger even than fear. None of us has given up.”

Kindness was the driving force behind this extraordinary effort. “Because of this, we’ve named our collective efforts during the ongoing health emergency Time for Kindness,” explains Rosario Valastro, Vice President of the Italian Red Cross and volunteer for the past 27 years.

“Initially, when little was known about the virus, one piece of information was being passed around more than the rest: people were saying that it would only affect older people in society, almost that their lives were fragile and not as secure as those of the rest of us. The elderly were urged to stay at home, at the risk of being forgotten. We wanted to empathise with the loneliness felt by the elderly and those who were more vulnerable, and by all our neighbours who were suffering financial and psychological difficulties, and take care of them. Time for Kindness became a positive circle of solidarity, humanity and care.”

“It was a crucial contribution,” Valastro explains, referring to Amazon’s €500,000 donation, “with which we’ve been able to cover the basic needs of 15,000 people. I’d experienced Amazon’s efficiency as a client, but never its enormous compassion, which is also one of the moral pillars of the Italian Red Cross.”

As well as the direct donation, Amazon gave the Red Cross space on the Amazon.it website, creating a special button to encourage customers to donate. Not only that: with the Italian All Stars 4 Life project, Amazon, in collaboration with the Italian music industry, has enlisted the help of some sixty musical stars to reinterpret the classic Italian song Ma il cielo è sempre più blu by Rino Gaetano, the proceeds of which will also go towards supporting the Red Cross. A remote collaboration, in which the big names of the music industry sang one-after-the-other the verses of the song, then released it in a musical event that was streamed on the Amazon website and on Rai 1, the main Italian TV channel.

“The remake of Rino Gaetano’s song was a beautiful gift,” Valastro continues. “Ma il cielo è sempre più blu was the soundtrack of our celebrations, a song of joy and hope, filling all who heard it with energy.” Because even after the worst of storms, it’s inevitable that the sky (il cielo) will look even more blue (piu blu).

Amazon StoriesCOVID-19
How did you like this story?
Yawn
It's OK
It's Good
It's Great
I love it!
Thanks!
Working at Amazon 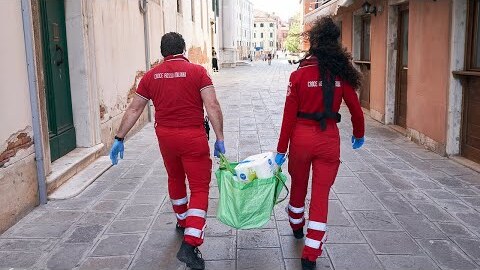