New Bundesliga Match Fact will showcase the speed on the pitch

Introducing Speed Alert, powered by AWS, the latest advanced insight into football
By Day One Team

In May 2020, as part of the AWS technology partnership with Bundesliga, football fans around the world were introduced to Bundesliga Match Facts powered by AWS. Match Facts features the first set of in-game advanced statistics using real-time data to quantify the action on the pitch, enhancing the viewing experience for fans. It offers insights into a team’s playing strategy and how it changes over the course of a game with Average Positions, and the expected probability of goals scored with xGoals (short for Expected Goals).

Now, with the 2020-21 season underway, AWS and the Bundesliga are set to launch the next Match Fact in time for Matchday 5, this time measuring the quickness on the field through Speed Alert. This new statistic will give insight into the speed records pulled off during a live match.

How Speed Alert displays a player's speed during a match
Speed Alert displays how fast a player can sprint at any given time during a match, and helps provide a ranking of players by comparing the maximum speed between players, teams, seasons, and all-time Bundesliga records. This new advanced statistic displays speed in km/hour and the type of record (i.e. match, personal, team, etc.) achieved. Speed Alert provides the 500 million Bundesliga fans from across 200-plus countries worldwide with an engaging way to validate their assumptions on who some of the fastest footballers are.

During every match, player positional data is captured at 25 frames per second, which Bundesliga uploads in packages to AWS. Every frame is split by a player identification that contains data points like speed, coordinates on the field, and more. Uploading this as a positional package affords the Bundesliga the ability to parse every player in his own data frame, which creates a speed variable for every player during the course of a match. The rankings are updated in real-time and should a player break a previous record, an alert will notify broadcasters. At the end of every match, the top three players’ speeds are displayed. As Bundesliga uses this new Match Fact, these rankings will be incorporated into the broadcast in a comparative fashion.

More AWS-powered broadcast elements for Bundesliga this season
This isn’t the only broadcast element that AWS is enabling for Bundesliga this season. By using AWS Media Services to power its new live streaming service, Bundesliga matches are now available across any type of device. AWS Elemental MediaLive provides the Deutsche Fußball Liga (DFL), the governing body of the Bundesliga, with flexible capacity for encoding – converting data from one form to another – independent of resolution or codec requirements. The fully managed service enables the DFL to implement encoding without having to invest in new hardware, avoiding lengthy integration and upgrade cycles.

“Our work with AWS has allowed us to advance our technological transformation faster than even we could imagine. In short, AWS is helping us unlock the next generation of innovation to enhance the fan experience and deliver deeper insights into the game,” said Andreas Heyden, Executive Vice President of Digital Innovations for the DFL Group. “While fans are thrilled with these new Bundesliga Match Facts powered by AWS, we are excited about our ongoing work with AWS beyond enhancing the fan experience. From streaming services to machine learning, storage, analytics, databases, and much more, AWS is a great partner for us to continue on our mission to be the innovative sports league in the world.”

The Bundesliga will release five additional Match Facts during the 2020-21 season, and will also rely on AWS to power new personalized experiences for fans this season. Stay updated by visiting aws.amazon.com/sports/bundesliga.

Discover our peculiar interview ways, what to expect, and how to prepare.
Continue reading
X
Out for Delivery
Thank you!
Please try again
Quick news and rich insights from inside Amazon, delivered directly to your inbox every few weeks.
Check your inbox shortly for your very first Out for Delivery email. We’ll reach out every few weeks with more.
If you’re not redirected back to the blog in a few seconds, click here.
Looks like we had some trouble authenticating your entry. Let’s try again...
Amazon Privacy Policy | Opt out anytime
Return to video player ➡ 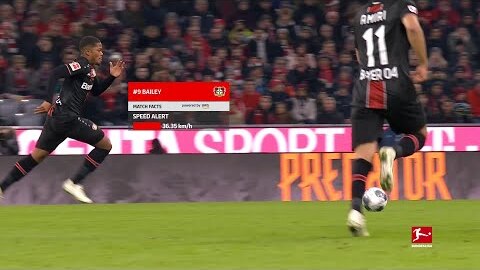