The first off-site solar project that is providing Amazon with renewable energy in Europe, is located in Alcalá de Guadaira, Seville in Spain. It provides the equivalent of the energy needed to supply 30,000 Spanish homes.
By Equipo Historias Amazon

Denise Hugo couldn’t imagine, twenty years ago when she first landed in Seville as a university student, that her destiny would lead her to find work and love so far from her hometown, Minneapolis (USA).

Since March of this year, she has been the Senior Renewable Energy Program Manager at Amazon and is currently involved in the operation of Amazon's first off-site solar project to provide Amazon renewable energy. The project is already operating in Europe, in Alcalá de Guadaira (Seville).

The third time's a charm

Denise discovered Seville at the age of 20 during a university exchange in Political Science. After finishing her studies, she returned in 2003 looking for a professional future. She succeeded: "I started as an English teacher in a start-up dedicated to renewable energy, and I discovered a world that opened the doors to my future career."

"In 2011, I returned to my country to continue working first with solar technology companies and then with companies developing renewable energy." Looking back, Denise reflects on Amazon projects like the one in Alcalá de Guadaira: “This solar project exists thanks to corporate purchasing of the energy, an unthinkable fact just a few years ago”.

"And in March 2020, I returned to Spain, for the third time, as Senior Renewable Energy Program Manager for Amazon, the Alcalá de Guadaira solar park was under construction."

“Amazon is on a path to powering our operations with 100% renewable energy by 2025,” says Denise. This is part of The Climate Pledge, which was launched with the objective of achieving net-zero carbon within our operations before 2040, ten years before the agreement in the Paris Agreement.

The Alcalá de Guadaira solar project is the first off-site operating project in Europe to supply Amazon with renewable energy. "This solar project provides 149 megawatts of renewable energy for the Amazon logistics network in Spain and also for Amazon Web Services data centers. This is equivalent to the energy needed to supply more than 30,000 Spanish homes,” explains Denise.

"Amazon has already announced a second solar project to be located in Zaragoza." In addition, Amazon Web Services will open an AWS Europe Region in Aragon in Spain, that it will become the seventh AWS Region in Europe.

"All of these projects represent a step forward for Amazon to achieve carbon neutrality by 2040, as part of The Climate Pledge," explains Denise.

SustainabilityRenewable energy
How did you like this story?
Yawn
It's OK
It's Good
It's Great
I love it!
Thanks!
Working at Amazon

Find out why our employees joined, why they stay, and why their ID badges aren't all the same color.
Continue reading
Sustainability

New offshore wind project in the Netherlands is scheduled for operation by 2024, bringing us closer to our goal to reach net-zero carbon by 2040.
Continue reading
X
Out for Delivery
Thank you!
Please try again
Quick news and rich insights from inside Amazon, delivered directly to your inbox every few weeks.
Check your inbox shortly for your very first Out for Delivery email. We’ll reach out every few weeks with more.
If you’re not redirected back to the blog in a few seconds, click here.
Looks like we had some trouble authenticating your entry. Let’s try again...
Amazon Privacy Policy | Opt out anytime
Return to video player ➡ 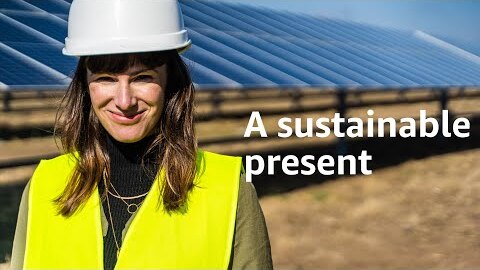